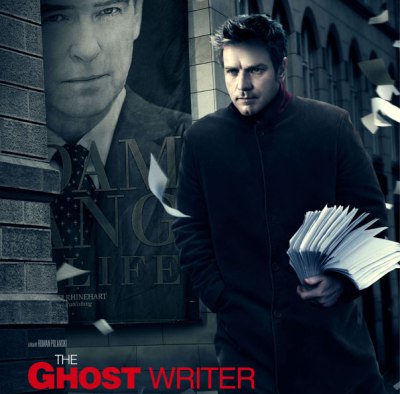 In Roman Polanski's The Ghost Writer, Ewan McGregor plays an author hired to ghost-write the memoirs of former British Prime Minister Adam Lang. The ex-PM, played by Pierce Brosnan, is directly inspired by Tony Blair (whose own memoirs will be published this year, under the awful title A Journey). In a parallel with Polanski (who is currently under house-arrest in Switzerland, following his 1977 sexual assault conviction), Lang's travel is restricted to avoid extradition and criminal charges.

The previous ghost-writer died in suspicious circumstances, and McGregor's character investigates a potential conspiracy; it's implied that his paranoia is justified, though there is no explicit corroboration. McGregor's character - selected as a pawn by a femme fatale, in an investigation he cannot control - is superficially similar to another Polanski protagonist, JJ Gites in Chinatown. In The Ghost Writer, however, Chinatown's bleached sunshine is replaced by a less cinematic, permanently overcast atmosphere.

Polanski's greatest films (such as Chinatown, Death & The Maiden, Repulsion, and Rosemary's Baby) are morally ambiguous and psychologically shocking, whereas The Ghost Writer is simply an extremely effective thriller. Like the equally entertaining Shutter Island, and Polanski's The Ninth Gate (and the cliche-ridden Angels & Demons), it's a code-cracking suspense film with a twist ending.
Categories: film reviews, politics, Tony Blair
continued...