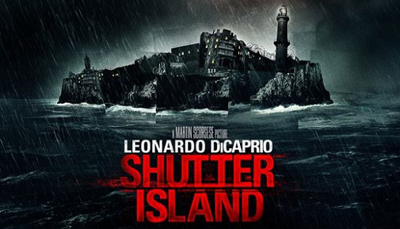 Martin Scorsese's Shutter Island stars Leonardo DiCaprio as Edward Daniels, a US Marshal investigating the mysterious disappearance of Rachel Solando, a patient from a mental institution on an isolated island. The Solando case (which acts as a MacGuffin for Daniels and a red herring for the audience) is complicated by the Marshal's obsessions with both his dead wife, Dolores Chanal, and the man who killed her, Andrew Laeddis.

Scorsese sets up the island as a foreboding and sinister environment, leading us to expect a Spellbound-style revelation about evil psychiatrists, though the plot twist is actually closer to that of Memento or even The Cabinet Of Dr Caligari. Everything is turned on its head, and there is a great deal of misdirection, with frequent dream sequences and hallucinations. It remains debatable whether the final explanation is either therapy or conspiracy; the former seems far too elaborate, while there are coincidences that appear to disprove the latter.

The avant-garde soundtrack, comprised exclusively of modern classical music, includes compositions by Krzysztof Penderecki and Gyorgy Ligeti, who were both also used by Stanley Kubrick for The Shining. This may be more than accidental, as Kubrick's film also features a delusional and violent protagonist. Both films involve dead children, though Shutter Island's exploitation of Holocaust victims is surprisingly tasteless.

Like Scorsese's previous film The Departed, also starring DiCaprio, the events take place in Boston. (The actor and director have also collaborated on Gangs Of New York and The Aviator, both of which were less successful.) The supporting cast includes the legendary Max von Sydow as a somewhat menacing German doctor; Ben Kingsley, who was surely chosen for his work in Death & The Maiden rather than Gandhi; and Elias Koteas, in a cameo role, who is the spitting image of former Scorsese collaborator Robert De Niro.
Categories: film reviews
continued...