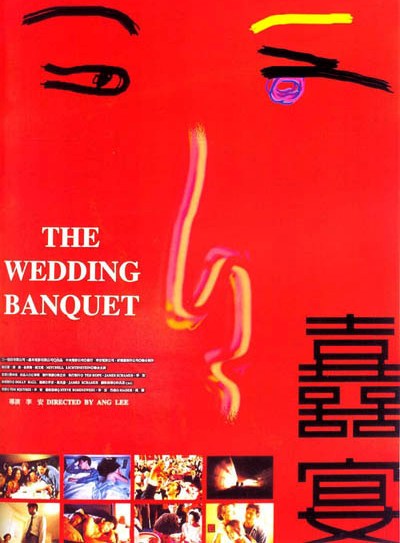 The Wedding Banquet stars Winston Chao as Wai-Tung, a Taiwanese businessman living in New York. Mitchell Lichtenstein (director of Teeth) plays Simon, Wai-Tung's American boyfriend. Wai-Tung's parents are eager for him to get married, and when they come to visit him in New York he has to pretend that he is not gay. The plot now seems overly familiar, and La Cage Aux Folles (remade as The Birdcage) is a superior treatment of a similar scenario.

The cross-cultural problems of immigrant life are not explored, though the film is a commentary on the tension between traditional expectations and contemporary realities. Much of this tension is played for laughs, though the final reel is more subdued. The director has a cameo as one of the guests at the wedding banquet.

This is Ang Lee's second film set in New York, after his debut Pushing Hands. It was followed by Eat Drink Man Woman, filmed in Taiwan, though most of his subsequent films have been Hollywood productions. Alongside Tsai Ming-Liang, he was part of a second wave of Taiwanese directors to emerge in the early 1990s, after the initial Taiwanese New Wave led by Hou Hsiao-Hsien and Edward Yang.

His work has occasionally attracted controversy, notably the sexually explicit Lust, Caution and the (arguably over-rated) gay western Brokeback Mountain. His influential martial-arts film Crouching Tiger, Hidden Dragon was the most successful foreign-language film ever released in America and the UK, and is one of my ten favourite films of the decade.
Categories: film reviews
continued...