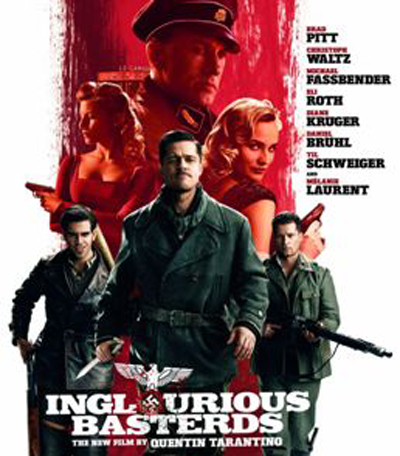 Inglourious Basterds [sic] is the new film by Quentin Tarantino, slightly re-edited (and two minutes longer) following its premiere at Cannes earlier this year. For more than a decade, Tarantino had been telling interviewers that he was planning a 'guys on a mission' film, and he had apparently been writing the script for much of that time. The result is a World War II revenge fantasy in a 'spaghetti western' style. (The opening caption, "Once upon a time", indicates the fantasy element; it's also a spaghetti western tribute, as are the many Ennio Morricone music cues.) The title is an intentional (though unexplained) mis-spelling of The Inglorious Bastards, the American release title of a 1978 Italian exploitation film.

So, Tarantino is again paying homage to 1970s genre cinema (after Blaxploitation in Jackie Brown, rape-revenge in Death Proof, and 'chop socky' in Kill Bill), though here he's also paying tribute to the cinema in general. The 'basterds' of the title, a group of Jewish-American vigilantes intent on killing Nazi soldiers led by top-billed Brad Pitt with a Southern drawl, are not really the main focus of the film. The crux of the plot actually involves a scheme to kill Adolf Hitler and other high-ranking Third Reich officers, by sending a former film critic and an actress to blow up a Parisian cinema. Coincidentally, the cinema's owner also plans to burn it down, by setting fire to inflammable nitrate film prints. Thus, cinema literally saves the world.

Christoph Waltz has received substantial praise for his performance as SS Colonel Landa. His character is arguably more significant than Pitt's, and he certainly gives the film's greatest performance. Speaking French, English, German, and Italian, he charms his suspects with effortless charisma. The film is composed of a series of chapters, each containing one or more long dialogue scenes; those featuring the cordial yet ruthless Landa are the most tense, amusing, and captivating. Like Samuel L Jackson and Harvey Keitel in Tarantino's Pulp Fiction, Waltz's precise delivery and verbal dexterity steal the show. (Jackson and Keitel have voice-over cameos in this film, as does Tarantino himself.)
Categories: film reviews
continued...