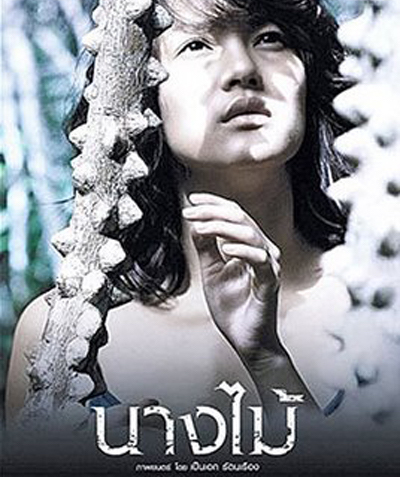 In Pen-ek Ratanaruang's Nymph, a young married couple take a camping trip to the forest. Nop communes with nature and photographs the surrounding trees, while his wife May is more interested in her cellphone signal, calling Korn, her lover back in Bangkok.

Nop becomes fascinated by one tree in particular, caressing its trunk as if it were a woman's body. He sees a nude woman in the distance, and follows her deeper into the forest. The woman he sees is perhaps the same woman who killed two rapists in the film's impressive prologue, with the camera swooping through trees and over a river. The woman may also be a spirit (the nymph of the film's English title) who personifies the unusually compelling tree.

Exactly what happens to Nop remains ambiguous. He seems to disappear, though later he apparently returns to the couple's house. As in Nang Nak, the returning spouse may not have returned at all; Nop may, in fact, have become a forest spirit himself, as does the missing boy in Apichatpong Weerasethakul's Tropical Malady.
Categories: film reviews, Thailand
continued...