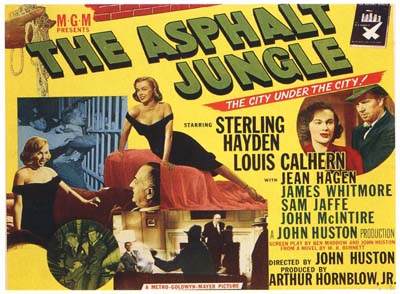 The Asphalt Jungle, directed by John Huston, is a heist film starring Sterling Hayden. As in so many subsequent heist films, a gang of expert criminals is assembled to plan and execute the perfect robbery. Naturally, the execution doesn't quite go according to plan: a combination of coincidences and double-crossings ensure that crime does not pay (as dictated by the American film censors, of course).

While in later films it's often the chief of police who's revealed to be the most corrupt character, in The Asphalt Jungle it seems that every character except the chief is corrupt. In fact, the police commissioner makes an earnest speech about the necessity of law enforcement, which is out of place alongside the film's otherwise gritty dialogue.

This is Huston's third film noir, after The Maltese Falcon and Key Largo. Those two earlier films had noir plots, though they were both rather stagey (confined to unatmospheric interiors, with characters who are entertaining rather than menacing). The Asphalt Jungle, on the other hand, is more stylistically and emotionally a film noir. It's full of dark shadows, and the equally dark plot offers no redemption for any of the characters.

There's a notable pre-stardom cameo from Marilyn Monroe, though Sterling Hayden in the hardboiled lead role gives the film's greatest performance. He would later star in Kubrick's The Killing, a film whose plot owes a great deal to The Asphalt Jungle.
Categories: film reviews
continued...