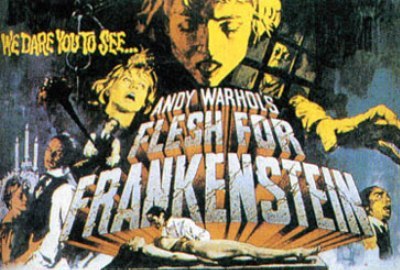 Flesh For Frankenstein was filmed back-to-back with Blood For Dracula, and both were directed by Paul Morrissey, who made all of Andy Warhol's Factory films from Chelsea Girls onwards. Morrissey steadily increased the production values, narrative conventions, and cinematic techniques of the Factory films, gradually shedding the 'underground' aesthetic Warhol had initially established.

Warhol's Factory star Joe Dallesandro appears in Flesh For Frankenstein, and, although he is the film's most naturalistic performer (because he was one of the few native English speakers in the cast), he is also the most out of place. He has the attitude of a New York hustler, which, although perfect for his earlier roles in Morrissey's Lonesome Cowboys, Flesh, Trash, and Heat, seems incongruous in the European Gothic context of Frankenstein. The other cast-members, led by Udo Kier as Baron Frankenstein, speak with thick German accents, consequently appearing stilted and artificial.

The film was made in 3D, so there are numerous shots of organs and implements thrust at the camera. I've seen only the 'flat' version, which loses the stereoscopic effects though adds more nudity from Dallesandro. There are decapitations and disembowelings aplenty, though the campy atmosphere removes any vestige of real horror. The tone is set by the film's most famous line, though it's been quoted so often in reviews that repeating it here is hardly necessary.

There is some dispute regarding directorial credit, as, in the film's Italian prints, Morrissey is listed only as a supervising director. It was filmed in Italy (using the same sets as Blood For Dracula), with uncredited second-unit direction by Italian horror director Antonio Margheriti, though rumour has it that Margheriti actually directed the whole film. This rumour has been convincingly denied by Morrissey and the leading actors, though the nature of Margheriti's contribution remains unclear.
Categories: film reviews
continued...