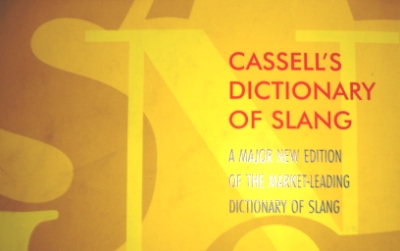 Jonathon Green is probably the world's foremost authority on slang. His first comprehensive lexicon, The Cassell Dictionary Of Slang, was published in 1998. This new book is a revised and expanded second edition, with a slightly tweaked title.

The new title is subtly though surprisingly different. The first edition was published by Cassell, so the title made perfect sense, though this new edition is published by Weidenfeld & Nicholson, an imprint of Orion (Cassell's parent company). The name Cassell doesn't appear anywhere except in the title. Also, "Cassell's" implies that the book was written by Cassell, not published by them. (Compare The Oxford English Dictionary - it would never appear as Oxford's English Dictionary.)

The text has been thoroughly revised, with many words being dated more specifically, including substantial antedating. The entries and definitions have also been dramatically expanded, from 70,000 headwords in the first edition to 85,000 in the second. A typical example is the phrase 'done up like a kipper'. In the first edition, it was broadly dated to "20C" [20th century], and had only two definitions: "beaten up" and "caught red-handed". However, in the second edition, it has been dated more specifically as "1980s+", and an extra definition has been added: "utterly defeated".

There are, though, some inexplicable omissions. While there are thousands of new headwords, some old ones have gone. Turning to my favourite word, for example, an incredible forty-three new variants have been added to the second edition, though four have been mysteriously removed. Also, the (albeit limited) bibliography from the 1st edition has been deleted completely, replaced by a concise history of slang lexicography. (Green wrote a longer history of the subject in his excellent Chasing The Sun.)

JE Lighter's Historical Dictionary Of American Slang, a multi-volume work-in-progress, expects to define 35,000 headwords upon completion - less than half the number in Green's single volume. Green's work is also more geographically inclusive, covering English-language slang from all English-speaking nations, rather than limiting its scope only to America. The only other heavyweight modern slang lexicographer, the late Eric Partridge, died in 1979, though a new, two-volume edition of his Dictionary Of Slang & Unconventional English has recently been published (retitled the New Partridge Dictionary). This ninth edition runs to 65,000 headwords, though it concentrates solely on post-1945 vocabulary. Green, on the other hand, documents 500 years of slang.

Lighter's dictionary, and the two-volume edition of Partridge, are both based on historical principles - that is, they illustrate their definitions with citations, literary quotations to indicate usage in context. Green's single-volume dictionary does not include citations, for reasons of space, though the good news is that he is currently preparing his own multi-volume slang dictionary, on historical principles, with at least 100,000 headwords, to be published (hopefully) later this year.
Categories: book reviews, the c-word
continued...