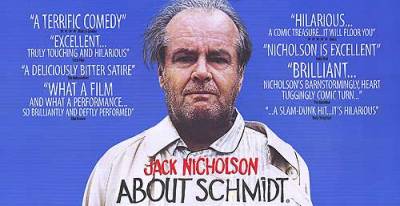 About Schmidt (directed by Alexander Payne) stars Jack Nicholson as Walter Schmidt, an insurance actuary who reassesses his life following his retirement and the death of his wife.

Nicholson is almost unrecognisable as Schmidt. His trademark grin and wild mannerisms are gone, and his body language is totally transformed. If The Departed showed how manically excessive he can be, About Schmidt demonstrates that he can also be subtle and subdued. It must be one of his best performances since Chinatown and One Flew Over The Cuckoo's Nest. (When he orders a drink, the framing is the same as Nicholson's hotel bar scene in The Shining.)

Schmidt is a man who keeps his feelings to himself. It's a completely believeable against-type performance, capturing the frustration, bewilderment, and loneliness of late-middle-age. Only at the very end of the film is Schmidt given an emotional release, making this final scene incredibly moving.

The bland suburban locations (Colorado, Kansas, and Nebraska) and slow pacing add to the film's realism, as do the naturalistic performances of the supporting cast. Numerous tiny observations (such as Schmidt's wife holding his hand at his retirement party, and the answerphone cutting out before he can finish recording a message) combine to create a wonderful, sad, funny, character-driven film.
Categories: film reviews
continued...