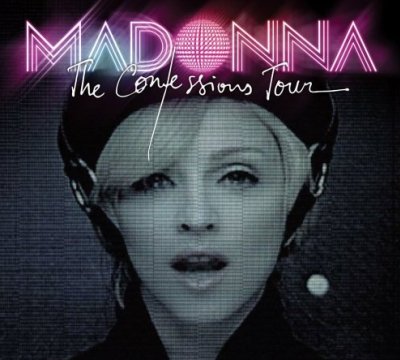 Madonna's Confessions Tour was released in a dual-format edition (CD and DVD) last month. Like I'm Going To Tell You A Secret, it features a CD with selected live tracks, though this time the DVD includes the complete concert (last year's Confessions Tour, filmed in London) with only minimal backstage rehearsal footage.

After the heavily re-edited Reinvention Tour extracts in the I'm Going To Tell You A Secret documentary, it's great to see the full Confessions Tour show on this new DVD. Madonna's voice sounds amazing (better than some of her previous tours), and, as in Reinvention, she is surrounded by dazzling video walls.

The show begins with the mediocre Future Lovers, though her performance is so good it makes you forget that the lyrics are nonsensical. Like A Virgin still sounds amazing after all these years (and was the only true classic missing from the Reinvention Tour).

The DVD set list is: Future Lovers, I Feel Love, Get Together, Like A Virgin, Jump, Confessions, Live To Tell, Forbidden Love, Isaac, Sorry, Like It Or Not, I Love New York, Ray Of Light, Let It Will Be, Drowned World/Substitute For Love, Paradise (Not For Me), Music Inferno, Erotica, La Isla Bonita, Lucky Star, and Hung Up. The concert was previously broadcast by NBC on 22nd November last year.

The CD track list is: Future Lovers, I Feel Love, Like A Virgin, Jump, Confessions, Isaac, Sorry, I Love New York, Let It Will Be, Music Inferno, Erotica, Lucky Star, and Hung Up.
Categories: Madonna
continued...