I'm Going To Tell You A Secret 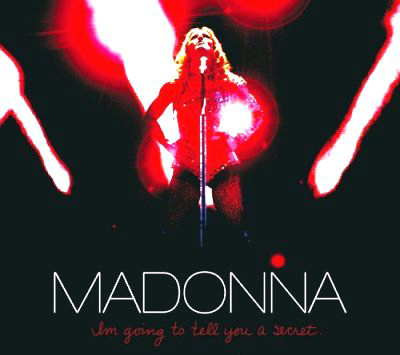 Madonna's new live album and documentary both have the same (slightly cumbersome) title, I'm Going To Tell You A Secret. The album includes highlights from the Reinvention Tour, and the documentary, like Truth Or Dare, includes concert footage and backstage sequences.

In the documentary, she is filmed in her car after (I think) the concert I saw, and she says it was her best Reinvention show thus far and her sweatiest show ever. We have an insight into life with Guy Ritchie and her children, though the best material is the live footage of Vogue and Nobody Knows Me. The only downside is that, towards the end, it goes into preachy Kabbalah overdrive.

The album's track-list is: The Beast Within, Vogue, Nobody Knows Me, American Life, Hollywood, Die Another Day, Lament, Like A Prayer, Mother & Father, Imagine, Into The Groove, Music, Holiday, and a demo of I Love New York.
Categories: film reviews, Madonna
continued...