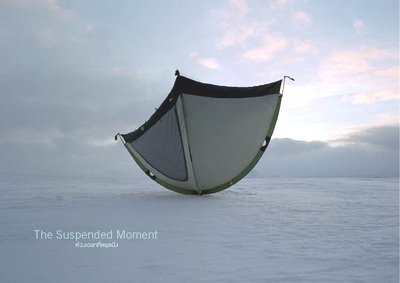 The Suspended Moment is a touring exhibition of works from the collection of Han Nefkens, currently on show in Bangkok from 6th-30th July. In her catalogue introduction, curator Hilde Teerlinck interprets the title as an instant frozen in time ("A Split Second"), which she describes as "the instantaneousness and transience of a moment". This recalls the 'decisive moment' philosophy of photographer Henri Cartier-Bresson.

Teerlinck doesn't cite Cartier-Bresson, though she does mention another interesting parallel. She notes a thematic correlation between the novel Girlfriend In A Coma - specifically its chapter titled "Dreaming even though you're wide awake" - and Kubrick's Eyes Wide Shut.

The concept of the exhibition is explored most literally in Blast, Naoya Hatakeyama's series of dramatic rock explosion photographs, in which the enormous energy of the blasts is eternally frozen. Otto Berchem's installation, Deadheading - a vase of stalks on a pedestal, with the flower heads scattered on the floor below - demonstrates the fragility of time, and the transience of perfection. Highly acclaimed Thai artist Araya Rasdjarmrearnsook's video Conversation, in which she speaks to a group of shrouded corpses, takes Berchem's concept to its logical conclusion.

More than the artworks themselves, however, the most important thing about The Suspended Moment is the very fact that it is on show in Bangkok. Such international group exhibitions of contemporary, conceptual art, in such diverse media (video, installation, painting, photography, and sculpture), are rare indeed in this city. The exhibition has been split into three venues (PSG, Tadu, and 100 Tonson), some of which are better organised than others, though when the forthcoming contemporary culture building is finished Bangkok will have a truly modern space large enough to accommodate such exhibitions, and will hopefully attract or even produce many more of them.
Categories: art exhibitions, Thailand
continued...