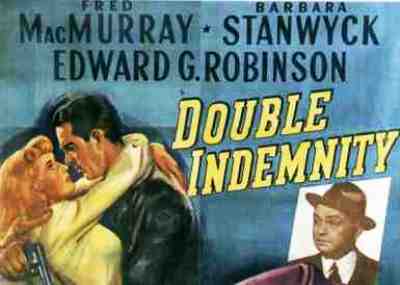 Double Indemnity is one of the archetypal examples of film noir. It has a despondent voice-over, an amoral male anti-hero, chiaroscuro light and shadow from Venetian blinds, and a femme (tres) fatale. It also tackles classic noir themes: murder, sex, and betrayal.

Barbara Stanwyck in an icy blonde wig is excellent as the sleazy wife plotting to kill her husband for his insurance money, and Fred MacMurray is great as the Mr Nobody insurance salesman who requires little persuasion to formulate a lucrative and murderous plan. The highlights are Stanwyck's lingering stares, straight into the camera, clearly revealing that she is about to double-cross MacMurray. But best of all is Edward G Robinson as MacMurray's boss, whose fast-paced and complex speech about suicide statistics is a key set-piece.

This being the 1940s, crime cannot pay, so Stanwyck's fate is doomed - but not, of course, before she admits that she is a tramp. MacMurray must pay, too, though in the unexpectedly tender conclusion he is shown genuine compassion by Robinson.