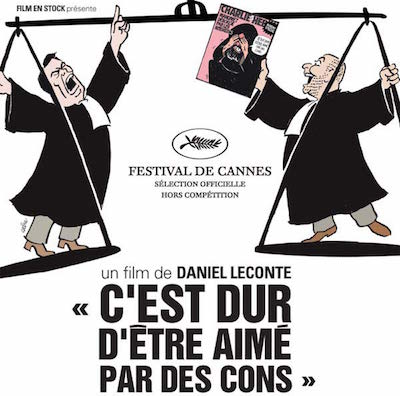 "C'est dur d'etre aime par des cons", a documentary directed by Daniel Leconte, profiles the French satirical newspaper Charlie Hebdo and its staff as they defend themselves against a lawsuit brought by the Grand Mosque of Paris and the Union of French Islamic Organisations. (The magazine was acquitted in 2007, and the BBC programme Bloody Cartoons also covered the trial and its aftermath. Last year, Charlie Hebdo was sued by the Muslim Judicial Defence League.)

The documentary takes its name from a 2006 Charlie Hebdo cover which depicts Mohammed weeping and complaining that "It's hard being loved by idiots". The cover appears in the film, and was even included on its theatrical poster, and Leconte's choice of title immediately dispels any notion of impartiality. (Charlie Hebdo's current issue again features a weeping Mohammed on its cover. The documentary was made before the infamous Charia Hebdo issue, and the terrorist attack on the newspaper last month.)

The film also features the twelve Jyllands-Posten Mohammed caricatures, a front-page France Soir newspaper cartoon commenting on the controversy, preparatory sketches of Mohammed drawn by Jean Cabut and Georges Wolinski, and a cartoon inspired by Kurt Westergaard's drawing of Mohammed with a bomb in his turban. A featurette on the DVD includes a rejected version of the film's poster, depicting a cartoonist stabbed in the back after drawing Mohammed.
Categories: blasphemy, censorship, film reviews, media
continued...