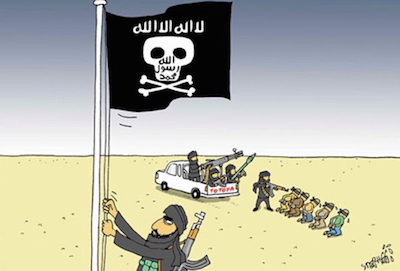 The editor of The Jakarta Post, Meidyatama Suryodiningrat, is facing a blasphemy trial in Indonesia, after his newspaper published a cartoon by Stephane Peray (known as Stephff) satirising the Islamic State terrorist group. Suryodiningrat could be jailed for up to five years if he is found guilty.

The cartoon, published on page seven on 3rd July, depicts an armed man raising a skull-and-crossbones flag bearing the words "There is no God but Allah" in Arabic. This slogan forms part of the Islamic shahada, which has been used on black flags by various Islamic terrorist groups including IS. (This year, IS has beheaded several Western hostages on video, echoing the actions of Al Qaeda in 2004.)

The editor issued an apology for the cartoon five days later, in a front-page editorial: "We sincerely apologize for and retract the editorial cartoon... The cartoon contained religious symbolism that may have been offensive. The Post regrets the error in judgment, which was in no way meant to malign or be disrespectful of any religion."
Categories: blasphemy, censorship, media
continued...