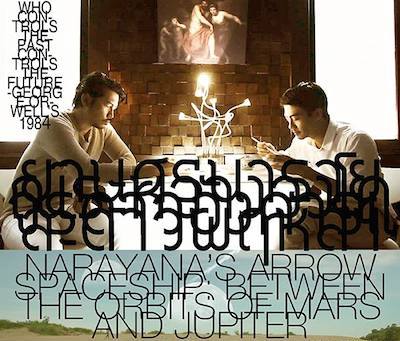 The 18th Thai Short Film & Video Festival will begin later this month, screening a selection of around sixty titles chosen from over 500 films submitted. Before the Festival opens, all 500+ submissions are being screened at BACC from 2nd July until 6th August. All screenings are free.

Tomorrow's Marathon session includes the short film ยานศรนารายณ์: ระหว่างวงโคจรดาวอังคารและดาวพฤหัสฯ. The film was made by a recognised Thai indie director, though it was submitted anonymously and will be shown without credits. (I'm sworn to secrecy.) It's an extract from a feature-length film, though some of the dialogue has been self-censored to avoid accusations of lèse-majesté. The film it was excerpted from was inspired by George Orwell's 1984, a novel which has since become an anti-coup symbol.
Categories: film screenings, Thailand
continued...