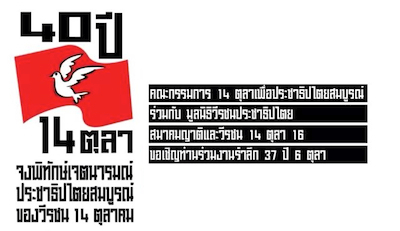 Two members of the Prakai Fai Karn Lakorn theatre group have been arrested, following a police investigation into a play staged by the group last year. The play, เจ้าสาวหมาป่า, was performed at Thammasat University on 6th and 13th October, as part of a week-long commemoration of the 40th anniversary of the October 1973 pro-democracy student uprising.

Several members of the theatre group were interviewed by police in November last year. In June this year, they were summoned by the NCPO and questioned about the play. One of the actors, Patiwat Saraiyaem, was formally charged with lèse-majesté yesterday, and writer/director Prontip Mankong was charged with the same offence today.
Categories: censorship, lese-majeste, Thailand
continued...