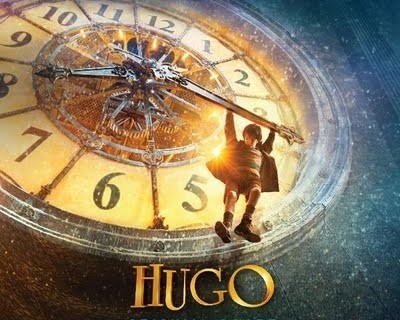 Hugo, directed by Martin Scorsese, is nominally the story of Hugo Cabret, a Parisian orphan, though its real focus is filmmaker Georges Melies, played by Ben Kingsley. Melies sells toys at a small booth, though Hugo discovers that he was a pioneer of science-fiction cinema. Melies directed A Trip To The Moon, silent cinema's first masterpiece, excerpts from which are included in Scorsese's film.

The film also features clips from other silent classics, including The Cabinet Of Dr Caligari (which set the template for Scorsese's Shutter Island), The Great Train Robbery (which inspired the final shot of Scorsese's GoodFellas), Workers Leaving The Lumiere Factory, and Intolerance. The scene depicted on the poster is, of course, a reference to Safety Last.

At a time of digital film production, exhibition, and distribution, Scorsese emphasises the medium's mechanical origins, and hopefully the film will introduce silent films to a new generation. (Scorsese has promoted early cinema before, writing the foreword to Silent Movies.) It's a charming film, and an evocative tribute to the first artist of cinema, though I wonder whether the Melies storyline will be sufficiently engaging for children.

Though written by John Logan - who also wrote RKO281, Rango, The Aviator (another Scorsese film about a director), and Sweeney Todd - Hugo has parallels with Scorsese's own life. Scorsese was captivated by the cinema as a child, and he rehabilitated the reputation of director Michael Powell, just as Hugo brings Melies back into the limelight. (I saw Hugo in 2D, though it was filmed in 3D and is also screening in a 3D version.)
Categories: film reviews
continued...