The Trouble With Harry 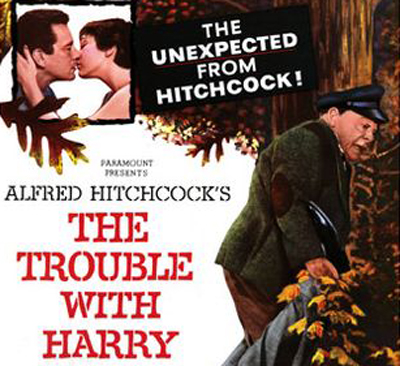 Alfred Hitchcock's black comedy The Trouble With Harry begins right away with the discovery of Harry's corpse in a wood. The body is found by a poacher, who assumes that he shot Harry by mistake and buries him to conceal the crime. But Harry is soon disinterred, and the poacher is vindicated. Then, a spinster reveals that she knocked Harry unconscious when he attacked her, and he is buried again to protect her modesty. The characters, including Harry's estranged widow, take all this in their stride, treating Harry's corpse merely as an inconvenience, with no sense of guilt, abjection, or even shock. They are all assisted by a local artist, Sam Marlowe, whose name is a cross between film noir detectives Sam Spade (The Maltese Falcon) and Philip Marlowe (The Big Sleep).

The film is full of bright, verdant autumn landscapes, a counterpoint to the macabre subject-matter. It's not a murder mystery, and has no suspense, making it a rather atypical Hitchcock film (though it's notable as his first collaboration with composer Bernard Herrmann). The setting, a village in Vermont, is almost equivalent to Royston Vasey (the fictional location of The League Of Gentlemen), with an insular population who seem to exist outside of conventional moral codes. The villagers discuss sex (the poacher crossing the spinster's "threshold"; whispered references to a "double bed") and death (Harry's repeated interments and exhumations) with a surprising frankness, and, in common with many Hitchcock characters, they seem to distrust the law.

In an unexpected 'happily ever after' ending, a passing millionaire grants wishes to all of the principal characters. It makes no sense at all, though it's surely deliberately unrealistic, perhaps even a Hitchcockian fairy-tale. As such, it's similar in tone to some of the Alfred Hitchcock Presents television dramas and Roald Dahl's Tales Of The Unexpected short stories.
Categories: Alfred Hitchcock, film reviews
continued...