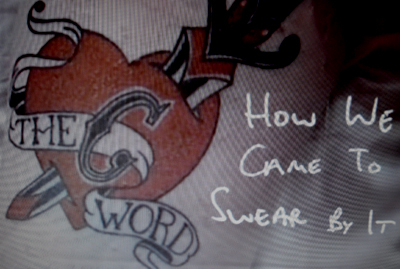 The C Word, rather cumbersomely subtitled How We Came To Swear By It, was broadcast by BBC3 in the UK on 30th July 2007. The programme, directed by Pete Woods, was an hour-long investigation into attitudes towards the c-word, making Channel 4's A Brief History Of The F-Word (2000) seem tame by comparison. It was a fascinating programme which managed to touch on all of the major debates surrounding the word.

The presenter, Will Smith, made the class aspect of the word a major focus, which is something I've always avoided because I feel that it's out-dated. Also, he interviewed the increasingly ridiculous Eve Ensler for far too long, presumably because others such as Germaine Greer had declined to appear. (Greer made a ten-minute segment about the c-word for BBC1's Balderdash & Piffle in 2006.) Smith told us that the word's first appearance in a newspaper was in The Independent in the 1980s; this 'fact' has been regularly repeated, though my own research has antedated the c-word's first newspaper appearance by over a decade.

[Full disclosure: I was invited to take part in this programme, but I couldn't fly back to the UK at a suitable time.]
Categories: media, the c-word
continued...