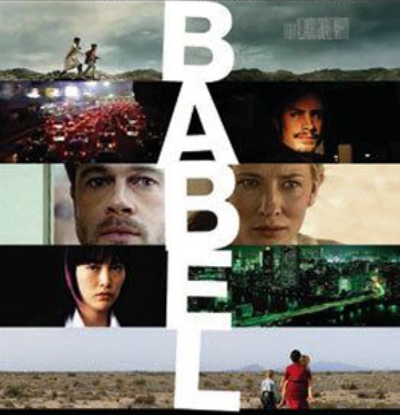 Babel, directed by Alejandro Gonzalez Inarritu, is a cross-cultural account of miscommunication, with a quartet of loosely inter-related narratives set in Morocco, Japan, and Mexico. Its structure, in which each strand revolves around a single event, is similar to Inarritu's earlier film Amores Perros.

It was Jean-Luc Godard who said that a film should have a beginning, a middle, and an end, though not necessarily in that order. Kubrick demonstrated the concept with The Killing, and Quentin Tarantino copied it from Kubrick with Reservoir Dogs and from Godard with Pulp Fiction. While the narrative fragmentation of Amores Perros was masterful, the technique doesn't quite work in Babel, as it effectively removes any suspense or surprise. When scenes are replayed from different perspectives, the technique is little more than a gimmick (in contrast to Tarantino's use of the technique in Pulp Fiction or Jackie Brown, in which each replay reveals new meanings).

Also, it's hard to feel much sympathy for the majority of Babel's characters. Rinko Kikuchi's mixed-up, deaf-mute Japanese teenager is perhaps the only truly sympathetic character, while the others (a frustrated American tourist, a Mexican maid staggering around the desert in high heels, and two amoral Moroccan children) deserve all they get. The naturalistic Gael Garcia Bernal is wasted in a small role, his character simply disappearing and never returning.

Finally, the exposition is extremely distracting. Characters mention things like virginity, cot-death, and suicide in un-natural ways, filling us in on their back-stories. This happens in many films, but in Babel it seems so frequent and unrealistic as to distance us from the characters and events.
Categories: film reviews
continued...