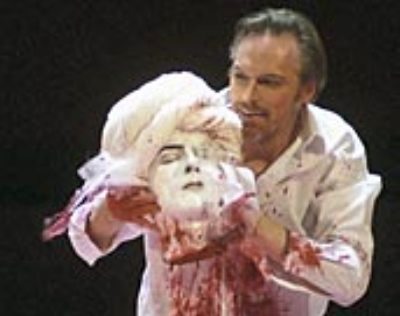 Idomeneo, the previously banned opera directed by Hans Neuenfels, was performed yesterday at Deutsche Oper Berlin. It will be performed again on 29th December. A triumph for freedom of expression!

Performances of the opera (written by Wolfgang Amadeus Mozart in 1781) opera originally scheduled for November were cancelled following advice from the German police, as the Neuenfels production includes a scene featuring the decapitated heads of Jesus, Buddha, Mohammed, and Poseidon. The production was performed in 2003, though it was initially felt that a revival this year may incite Muslim protests and thus put the safety of the performers and audience at risk. There were no reports of disturbances yesterday, however.
Categories: blasphemy, censorship
continued...