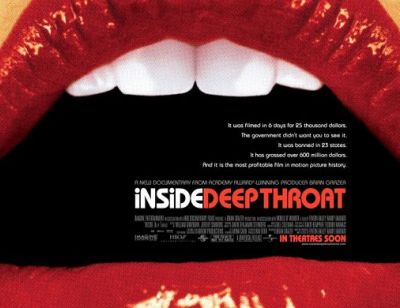 Inside Deep Throat, by Fenton Bailey and Randy Barbato, is a documentary about the film Deep Throat. It discusses the making of the film, the backgrounds of its stars and director, the film's distribution, convictions, and cultural impact.

The central argument of this rather polemical film is that Deep Throat represents a triumph of art, pioneering spirit, independent filmmaking, and enlightenment, suppressed by feminists, courts, and governments. The fact is, though, that the independent film movement began in the 1940s and 50s, the sexual revolution happened in the 1960s (both predating Deep Throat), and exploitation films have always been about money rather than art.

Some heavyweight names are interviewed, including Camille Paglia, Linda Williams, and Annie Sprinkle, though they aren't given enough time to develop their arguments. (The DVD commentary track, however, does include extra interview material.) Deep Throat's director (Gerard Damiano) and male star (Harry Reems) also contribute, though Linda Lovelace died shortly before the documentary was filmed.

The most notable omission is Chuck Traynor, Lovelace's husband, who beat her and (perhaps) forced her into making Deep Throat amongst other less savory films. Lovelace's contention that, when we watch Deep Throat, we are watching her being raped, is neither supported nor rejected, though the extent of her consent is an issue that requires the sort of balanced, in-depth analysis missing from this documentary.
Categories: film reviews
continued...