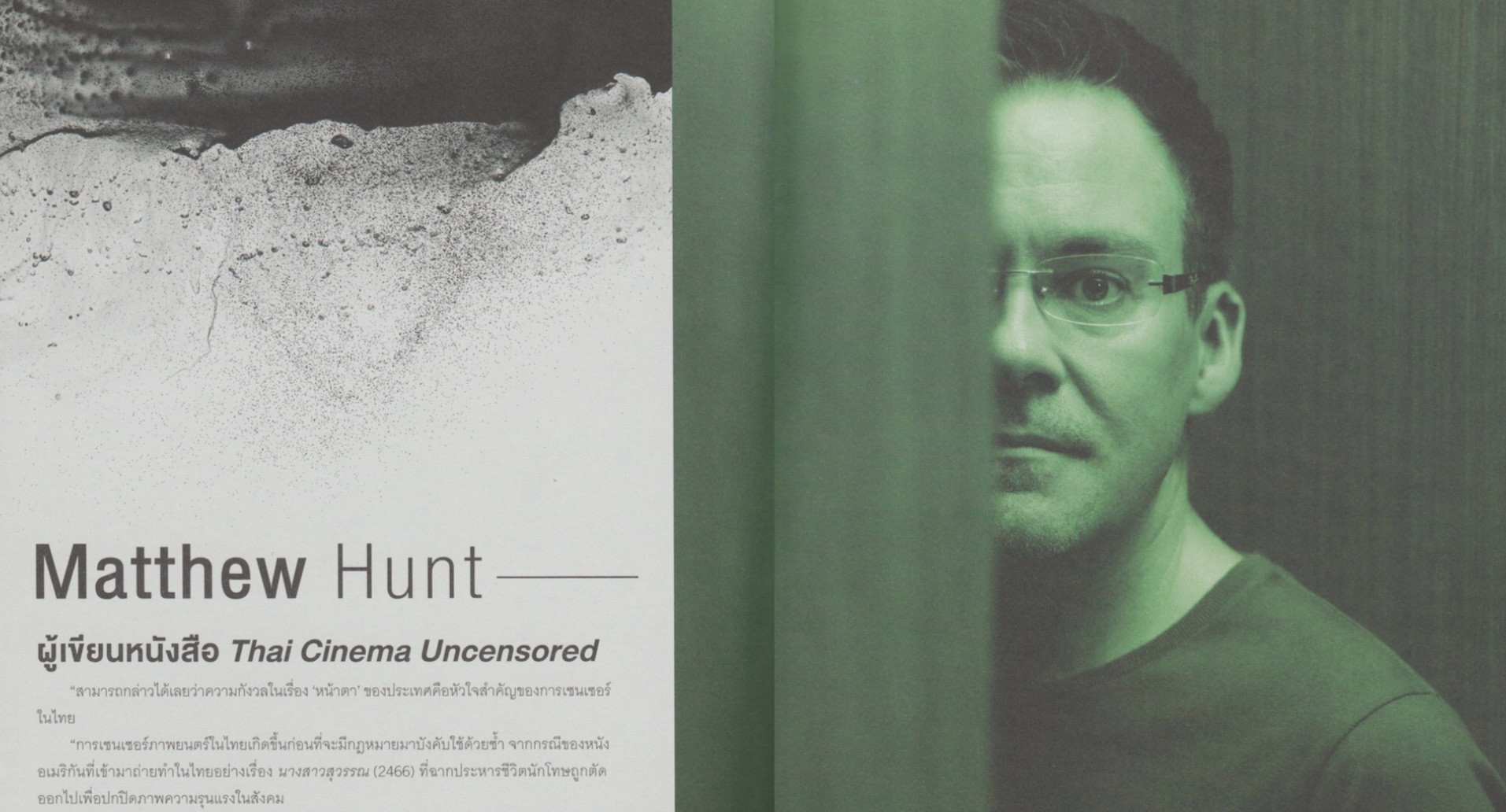 The new issue of A Day magazine (volume 22, number 250) was published yesterday. The issue is entirely devoted to Apichatpong Weerasethakul, under the theme of “Apichatpong’s Universe”. It includes an interview with me about film censorship, on pages 216-219. 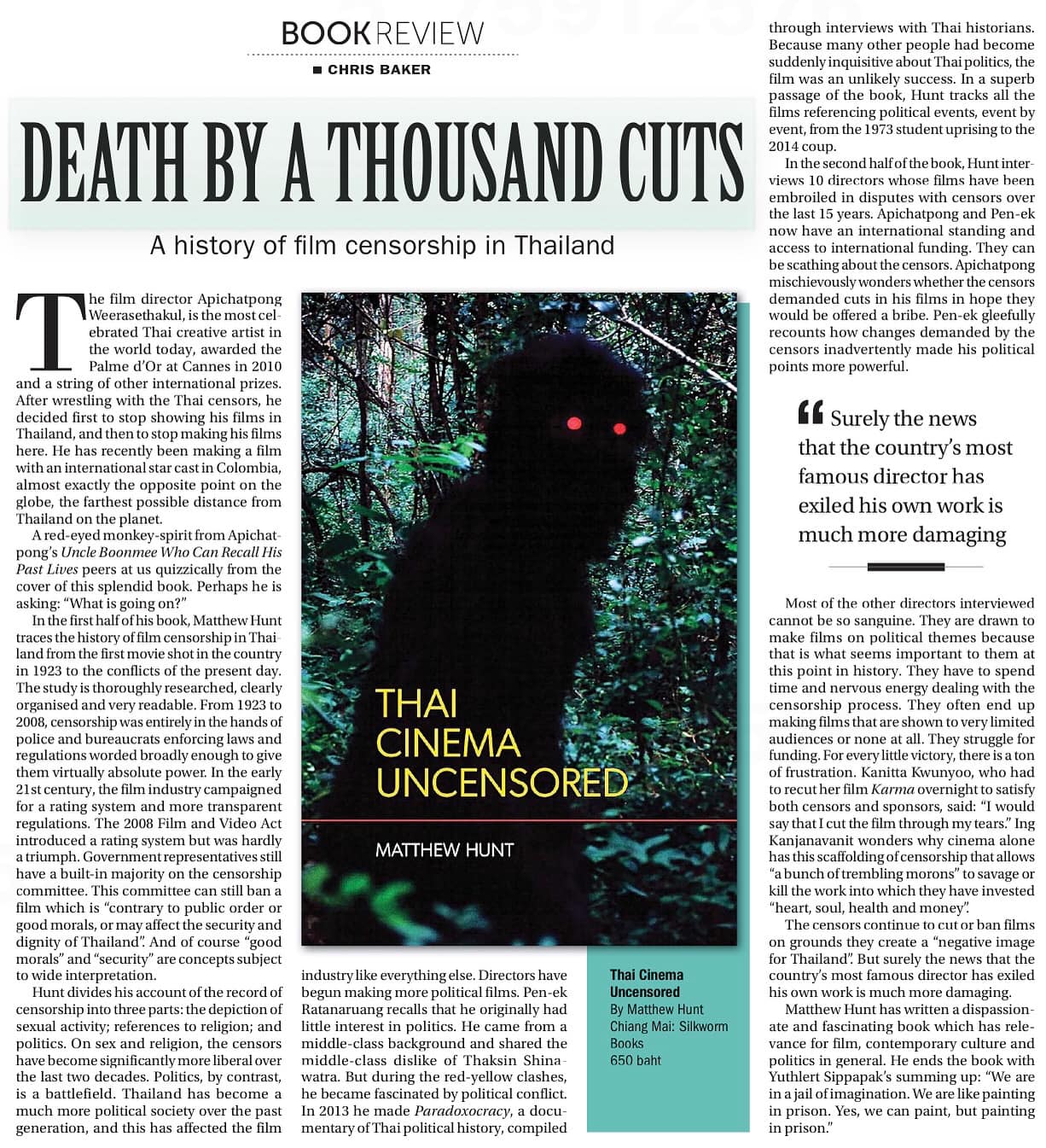 My book Thai Cinema Uncensored is reviewed in today’s Bangkok Post newspaper, on page 10 of their Life arts supplement. In his review, Chris Baker (who co-authored the excellent Thaksin) calls it a “splendid book.” He also describes it as a “fascinating book which has relevance for film, contemporary culture and politics in general.”
Categories: books, censorship, media, portfolio

I will be giving an online lecture at the University of Wisconsin-Madison’s Center for Southeast Asian Studies on 19th March (midday, US central time), with an introduction by historian Thongchai Winichakul. The lecture, Politics and Ideology of Thai Film Censorship, will be streamed on Zoom (ID: 979 8213 2663), and a video will be available on the Center’s website after the live stream. (The lecture will begin at midnight on 20th March, Thai time.)

The Center describes the session as follows: “Matthew Hunt wrote a book on Thai film censorship that includes interviews with ten directors whose films have been cut or banned. In this lecture, he will present an overview of the history of film censorship in Thailand, examine the consequences of the rating system, and show how filmmakers are finding ways to comment on Thailand’s volatile contemporary politics.”
Categories: portfolio

The first print review of my book Thai Cinema Uncensored has been published, in The Big Chilli magazine. The full-page article is on page 25 of the January issue.
Categories: books, censorship, media, portfolio

Thai Cinema Uncensored will be released in the US and the UK on 21st March 2021, distributed by the University of Washington Press, and is available for pre-order at all major online book retailers (including Amazon). It is also available as an e-book (Kindle, Google Books, and Kobo). In Thailand, the cover price is ฿650, while the US edition will cost $27.95 and the UK price will be £20.99.
Categories: books, censorship, portfolio

I've been speaking to four different BBC radio stations yesterday and today, discussing the bombing at the Erawan Shrine that took place in Bangkok yesterday. Last night, I spoke to BBC Coventry and Warwickshire (the station serving my home town) and another local station, BBC Hereford and Worcester. Tonight, I spoke to the regional BBC WM and the national BBC radio 5 Live.

I have interviewed actor Ananda Everingham as the cover feature for the July issue of Encounter Thailand magazine (In Bed With Ananda, on pages 26-33). The article has also been translated into Thai.

For the June cover story, I interviewed Pla Komaratat and Kay Sitongdee, and I interviewed Apichatpong Weerasethakul for the May issue. I edited the February, March, and April issues. My previous articles were published in October, November, and December last year.

I interviewed film producers Kay Sitongdee and Pla Komaratat as the cover feature for the June issue of Encounter Thailand magazine (Free As A Bird, on pages 28-31). The article has also been translated into Thai.

I've written a feature on the Thai ghost Mae Nak, for the same issue, reviewing the new film Pee Mak Phra Kanong (the most successful Thai film ever made). The article (The Haunted Screen, on pages 32-33) traces Mae Nak's extensive film appearances, including the classic Nang Nak.

I interviewed Apichatpong Weerasethakul for the May issue of the magazine, and I edited the February, March, and April issues. My previous articles were published in October, November, and December last year.

I have interviewed director Apichatpong Weerasethakul for the May issue of Encounter Thailand magazine (on pages 36-39). He discusses his entire career: his films Tropical Malady, Blissfully Yours, Syndromes & A Century, Uncle Boonmee, and Mekong Hotel; his Primitive project and other short films; and the Free Thai Cinema Movement.

I edited the February, March, and April issues. My previous articles were published in October, November, and December last year.

The April issue of Encounter Thailand, the magazine I edit, includes two of my articles articles about Thai elephants. The cover feature, Thailand's Ivory Trade (on pages 2-5), analyses the illegal ivory market. Elephants In The Movies (on pages 33-34) discusses the representation of Thai elephants in cinema.

I also edited the February and March issues. My previous articles were published in October, November, and December last year.

The March issue of Encounter Thailand, the magazine I edit, includes my feature Destination Thailand (on pages 30-32). The article is a review of the recent Chinese comedy Lost In Thailand.

I also edited the February issue. My previous articles were published in October, November, and December last year.

Since the start of this year, I have been editor of Encounter Thailand magazine. My previous articles were published last year, in October, November, and December.

I've written two features for the February issue. Play It Again, Siam (on pages 38-40) discusses Thai movie remakes. Filming The Tsunami (on pages 42-44) reviews the recent film The Impossible and compares it to previous movies about the 2004 tsunami.

My third feature for Encounter Thailand magazine, Reeling In The Cliches, was published in December last year (on pages 42-44). The article examines how Thailand has been portrayed by foreign films set in the country.

[Note: Banco A Bangkok OSS 117, Deep River Savages, Teddy Bear, Mammoth, Elephant White, The Detective, and Stealth were omitted for reasons of space; Bangkok Revenge will be reviewed in a later issue.]

My portrait of artist Chris Coles, and three photographs of his paintings, have also been published in the same issue (on pages 34-36). My previous Encounter Thailand features were published in October and November last year.

My debut feature for Encounter Thailand magazine, Thai Movie Censorship, was published in the October issue (on pages 38-39). The article examines films cut and banned in Thailand, discussing Syndromes & A Century, Insects In The Backyard, Shakespeare Must Die, and This Area Is Under Quarantine, including an interview with director Thunska Pansittivorakul.

Crone previously curated the exhibition and catalogue Still Moving Pictures, and edited the monograph Drama & Shadows, which also document Kubrick's Look photography. Crone's essay from Still Moving Pictures is reprinted in the new catalogue, though the catalogue's full-page reproductions are similar in presentation to Drama & Shadows. Many photo-stories and individual photographs are duplicated in all three books. A useful appendix reprints the covers and layouts of sixteen vintage issues of Look magazine.

Ladro Di Sguardi was the first book to reproduce Kubrick's photographs, and a brief selection was also included in the exhibition and catalogue Only In New York. Kubrick's contact sheets can be found at the Stanley Kubrick Archive, the Museum of the City of New York, and the Library of Congress.

I have researched and compiled a comprehensive list of Kubrick's Look photographs, and this is reprinted as a chapter in Crone's new book (pp. 306-309) without permission or acknowledgement. I have been assured that, in any subsequent editions, this chapter will either be credited to me or removed from the book.