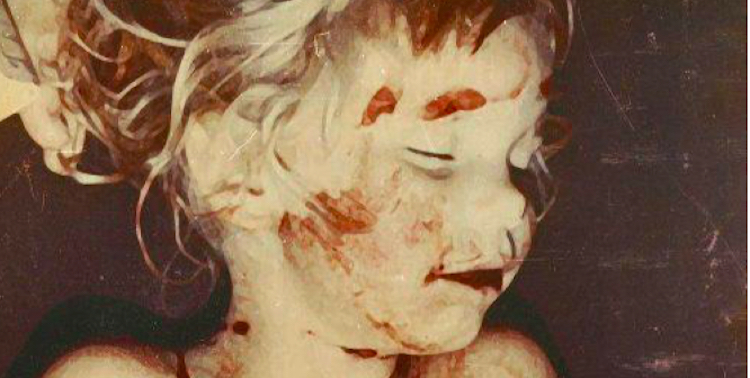 Canadian band Numenorean caused controversy in 2016 by using a post-mortem photograph of a two-year-old girl as the cover for their debut album Home. (On the CD version, the exploitative cover is inside a slipcase.) Kristen MacDonald was killed by her father in 1970, in a well-documented murder case, and the band explained their use of her image in the album’s liner notes: “Perhaps what we are really searching for is the innocence that we once had as a child. However, since we are incapable of ever getting that back, the only place we can perhaps find this comfort once more is in death.”

The first photograph of a dead body on a record cover was perhaps the Dead Kennedys’ single Holiday in Cambodia, released in 1980. The 12" single appropriated Neal Ulevich’s image of a public lynching after the 6th October 1976 massacre. Another notorious lynching appeared on the cover of the Public Enemy single Hazy Shade of Criminal in 1992: Lawrence Beitler’s 1930 photograph of the hangings of J. Thomas Shipp and Abraham S. Smith in Indiana. (This photo also inspired the writing of Strange Fruit, one of the most powerful protest songs in popular music history.)

There have also been two examples of severed heads on album covers. Pungent Stench’s 1991 album Been Caught Buttering used Joel-Peter Witkin’s photograph Le baiser (‘the kiss’)—a decapitated head sawn in half, appearing to kiss itself—as its cover image. Then, in 1993, Brujeria bought the reproduction rights to a photo of the head of a murder victim from the Mexican tabloid magazine ¡Alarma! (‘warning!’), for the cover of their album Matando Güeros (‘killing whiteys’).

UK goregrind band Carcass used montages of autopsy photographs as the covers for their albums Reek of Putrefaction in 1988 and Symphonies of Sickness a year later. Both albums were seized when police raided Earache Records in 1991, though no charges were filed. The raid was prompted by the earlier seizure of cover art for the Pain Killer album Guts of a Virgin. That image—an autopsy photo of a woman with her intestines exposed, in a tasteless pun on the album title—was destroyed by customs as potentially obscene, and the album was released with a modified cover. (The uncensored photo was used for the Japanese CD release.) Clearly, goregrind record sleeves are as gross as their titles, and Last Days of Humanity’s albums, such as Hymns of Indigestible Suppuration from 2000, are particularly nauseating examples.
Categories: censorship, music
Dateline Bangkok