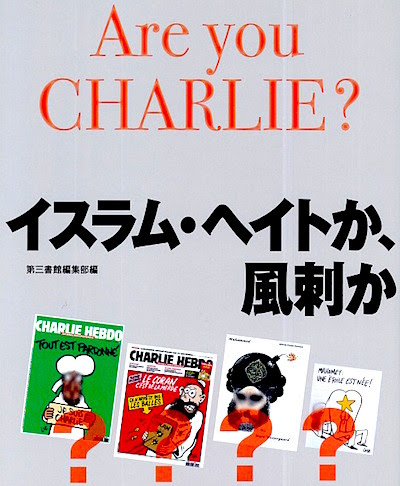 A new book published in Japan has reprinted a selection of Charlie Hebdo's most controversial cartoons. The book, Are You Charlie? イスラム・ヘイトか、風刺か, also includes several Mohammed cartoons from Jyllands-Posten. Mohammed's face has been pixelated in each cartoon reprinted in the book, though the cartoons on the cover have been only slightly blurred.

Are You Charlie? includes all of Charlie Hebdo's Mohammed covers (2006, 2011, 2014, and 2015), and its back-page Mohammed cartoons from 2012. Oddly, in the cartoons of Mohammed naked, only his face has been pixelated, while his genitals and buttocks remain uncensored. Also, the pixelation is not entirely successful: two images have been mistakenly pixelated, even though they depict generic Muslim men rather than Mohammed; only the larger of the two Mohammed caricatures on the Charia Hebdo cover has been pixelated; and two covers featuring adverts for La Vie De Mahomet Part 2 have not been pixelated.

Meanwhile, following the attack on Charlie Hebdo's office last month, there has been an attempted assassination of Danish cartoonist Lars Vilks in Copenhagen. A lone gunman fired into a cafe where Vilks was holding a meeting on Sunday morning; one person inside the cafe was killed, though Vilks escaped unharmed. (A previous plot to murder Vilks was uncovered in 2010, and cartoonist Kurt Westergaard's life was also threatened earlier that year. Vilks became a target after he exhibited caricatures of Mohammed as a dog in 2007.)
Categories: books, censorship, media
continued...