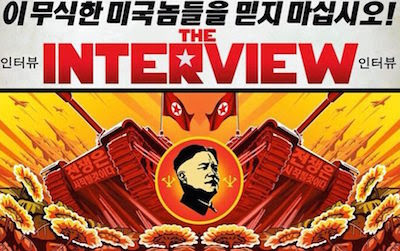 The release of the new film The Interview has been cancelled indefinitely by its studio, Sony Pictures. Sony had its computer system hacked earlier this month by a group known as the Guardians of Peace. The sophisticated hacking operation was apparently a response to Sony's planned release of The Interview, which was scheduled to open on Christmas Day.

The Interview is a comedy directed by Evan Goldberg and Seth Rogan, starring Rogan and James Franco as journalists who assassinate the President of North Korea, Kim Jong-Un. Its premiere was held in Los Angeles on 11th December, though all subsequent showings were cancelled after the hackers warned cinemas not to screen it. The major American cinema chains all pulled out of plans to show it, and Sony announced today that it would not be released in any form.

Kim's death scene, in which his helicopter is hit by a missile and his head is engulfed in flames, had already been significantly toned down before the film's premiere. Exceptionally, Sony Corp. CEO Kazuo Hirai personally approved the modifications to the scene, insisting that images of exploding flesh and skull fragments should be reduced. Hirai also stipulated that the entire death sequence should be removed from all international prints, and included only in the domestic American version.

Sony's decision to shelve the film entirely is almost unprecedented. It's especially surprising as Kim Jong-Un's father and predecessor, Kim Jong-Il, was ridiculed and assassinated in the puppet comedy Team America: World Police (2004). In that film, Kim was impaled on a spike, and after his death a cockroach crawled out from his mouth. A fictional assassination of American President George W Bush has also been filmed, in the Channel 4 drama Death Of A President (2006).
Categories: censorship, films, politics
continued...