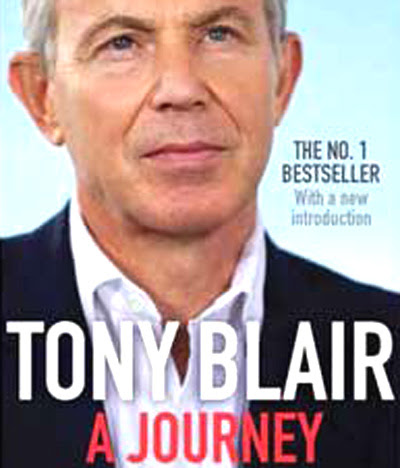 Tony Blair's memoir A Journey has now been published in paperback, with a new introduction. In his lengthy new essay, Blair calls for an end to the divisive polarisation of left/right politics, arguing that the boundaries between the two traditional opposites are increasingly blurred.

Blair presents some surprising statistics ("China will build seventy new international airports in the next decade"), though his analysis is hardly ground-breaking: his views on current issues (the Arab Spring, the global economy, the future of energy) are all sensible yet predictable. Also, the introduction has a more formal tone than the rest of the book; he doesn't abandon exclamation marks completely, though he does at least put them all on the same line: "listen! Get advice! Seek views!".
Categories: books, politics
continued...