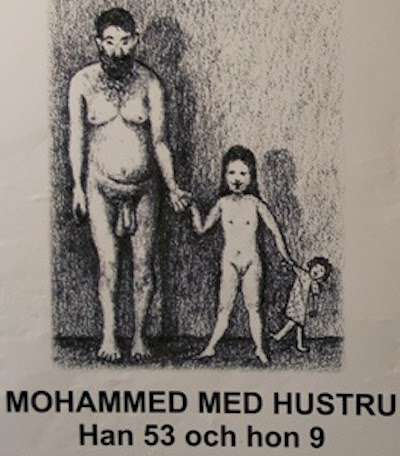 Skanepartiet, a Swedish anti-immigration party, has placed twenty posters around Malmo which feature naked portraits of Mohammed and his child-bride Aisha. The poster's caption reads "Mohammed med hustru" ("Mohammed with his wife"), and highlights the substantial differences in their ages.

The poster is gratuitously offensive, and Skanepartiet is an extremist and Islamophobic party with an abhorrent manifesto. A less provocative drawing of Mohammed appeared on a Danish political poster in 2007. Images of Mohammed and Aisha have appeared in the Thai magazine Sex No Go and the Dutch book Misselijke Grappen.
Categories: censorship, media
continued...