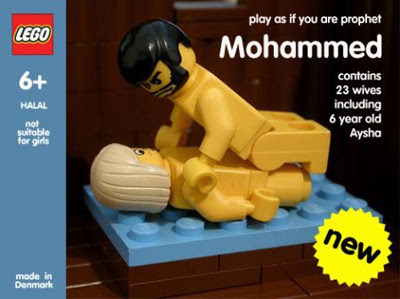 A Thai student magazine promoting sex education, distributed by Kasetsart University and the Thai Health Promotion Foundation, was withdrawn and destroyed earlier this month. The magazine, Sex No Go, which was originally published in January, featured a sexual image of Mohammed and his wife Aisha, depicted as Lego characters.

The Lego picture actually shows two Israelites, and was created by The Brick Testament website; it was used as a Mohammed parody in 2006, one of many satirical Mohammed images produced following the controversy surrounding twelve Mohammed caricatures published by Jyllands-Posten.

Mohammed married Aisha when she was a child; their relationship has previously been portrayed in a Dutch cartoon and an American novel. Mohammed has also been depicted in other sexual situations: with Jesus, in a Canadian magazine; and with Jesus, Moses, and Buddha, in an Israeli magazine.
Categories: censorship, media
continued...