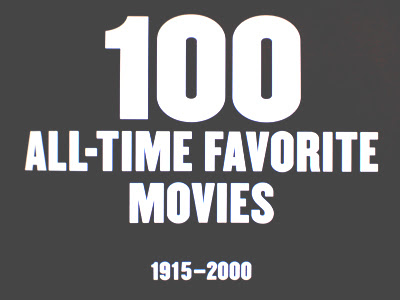 Not my favourite films, 100 All-Time Favorite Movies is instead the title of a new book edited by Jurgen Muller. Published by Taschen in two volumes (1915-1959 and 1960-2000), it includes a chronological survey of 100 classic films. Being a Taschen book, its layout and photography are superb; the selection of films is impressive, too, with only two questionable entries (Fanfan The Tulip and Forrest Gump) and only one inexplicable omission (Singin' In The Rain).

Taschen's 100 All-Time Favorite Movies are as follows:Note that Ben-Hur is the 1959 sound version rather than the 1925 silent version, and Scarface is the 1983 remake rather than the 1932 original. Also, Some Like It Hot is the 1959 comic masterpiece, not the obscure 1939 comedy. The oddest mistake: Psycho ends with a smirking skull, not a "smirking toilet seat" (page 440)!
Categories: book reviews, film lists 0 comment(s)

The Nation On Sunday

Following the Bangkok Post's Sunday relaunch and expansion last month, The Sunday Nation has been relaunched as The Nation On Sunday. It's still very thin, with just two pages of national news, and the Sunday edition seems to drop the business focus of the daily edition.

The rather pointless name-change is accompanied by a new magazine produced in partnership with Asia News. The first half of the magazine includes new features by Nation journalists; this is encouraging, as most features (and all international news and sport) in both The Nation and the Bangkok Post are supplied by agencies.

However, the back half of the magazine comprises reprints of Asian newspaper/magazine articles which were previously reprinted in Asia News. In what is either an embarrassing mistake or a sign of desperation, two of the articles reprinted from Asia News are actually articles which it reprinted from The Nation and the Daily Xpress. One of them is a preview of the World Film Festival and first appeared in the Daily Xpress on 10th October, more than two weeks ago.
Categories: media, Thailand 0 comment(s)

The Movies That Matter 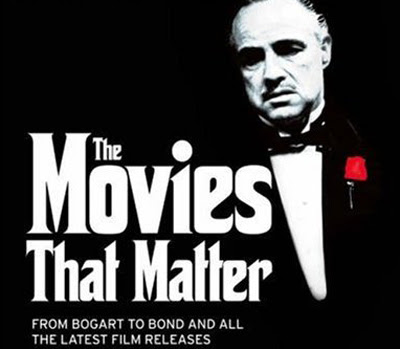 The latest (twenty-fourth) edition of Halliwell's Film Guide has been published, under the cumbersome title Halliwell's The Movies That Matter: From Bogart To Bond & All The Latest Film Releases. The book is edited by David Gritten, who took over from John Walker at the last minute before the previous edition was published. Gritten has made radical changes to this new edition, the most alarming being the removal of 20,000 film reviews.

In his introduction, Gritten outlines the dilemma he faced: Halliwell's Film Guide was expanding each year, as more films were added. The twenty-third edition reviewed over 24,000 films, and, apparently, readers were complaining that the book was too large and heavy. (Why don't they just buy more sturdy shelves?) So, Gritten decided to substantially shift the book's focus: it will no longer attempt to review every release, and will, instead, concentrate on only a few thousand noteworthy films. The emphasis is on theatrical releases, not on DVDs or videos, in another departure from recent editions.

Thus, there are reviews of every mainstream film released in the past year (350 of them), plus 2,000 significant films released in the past twenty years, plus 500 classic films released more than twenty years ago. (The 500 films range in chronology "from Intolerance to Blue Velvet", according to Gritten, though actually The Birth Of A Nation, which predates Intolerance, is also included.) In total, therefore, there are almost 3,000 films listed.

Why include 2,000 films from twenty years yet only 500 films from ninety years? Gritten's rationale is that "for good or bad, most films seen today" are less than twenty years old. That may be true, but it does not explain why they are Movies That Matter. Gritten, in his introduction, claims that the 2,000 films in the twenty-years group all have "brand new" reviews, though this is not really the case. Thus, although this new version has 350 extra reviews of very recent films, we are not actually getting value for money, because the deletions (more than 20,000!) far exceed the additions.

The films are listed alphabetically, though not always logically. For example, The Devil's Backbone is listed under 'T' (for 'The') whereas The Godfather appears under 'G' (for 'Godfather'). To add to the confusion, there is no cross-referencing of alternate titles.
Categories: book reviews 0 comment(s)

"He is sentenced to two years in jail..."

Former Prime Minister Thaksin Shinawatra has been convicted in absentia for violating the National Counter-Corruption Act. He was charged with facilitating his wife Potjaman's purchase of a plot of land at below market value. The plot, in Bangok's Ratchada district, was sold to Potjaman by the Bank of Thailand in 2003. The Supreme Court judge who announced the verdict today said: "Thaksin had violated the article of the constitution on conflict of interest, as he was then prime minister and head of government who was supposed to work for the benefit of the public. He is sentenced to two years in jail." Notoriously, Thaksin's lawyer, Pichit Cheunban, made a blatant attempt to bribe the judges during the trial, handing over a lunchbox containing 2,000,000 baht in cash.

Thaksin and Potjaman are currently living in exile in London. They jumped bail earlier this year, ostensibly to attend the opening ceremony at the Beijing Olympics, and have not returned to Thailand since. They were not prevented from leaving the country, and they were carrying a suspiciously large collection of luggage with them. Thaksin was ousted in a coup in 2006, while he was attending the United Nations in New York; corruption was one of the reasons cited as justification for the coup. A military-appointed Assets Examination Committee froze seventy-six billion baht of Thaksin and Potjaman's assets last year, pending the outcome of an anti-corruption investigation.
Categories: politics, Thailand, Thaksin Shinawatra 0 comment(s)

MovieMail's Top 50 Films Of All Time!

The November edition of the MovieMail Monthly Film Catalogue features a list of the Top 50 Films Of All Time.

The Top Fifty Films are as follows:

There are actually fifty-six films on the list, as it includes three trilogies. Interestingly, Blade Runner at #13 is the 'final cut' version with digital tweaks approved by Ridley Scott last year. Also, Some Like It Hot is the 1959 comic masterpiece, not the obscure 1939 comedy.
Categories: film lists, media 0 comment(s) 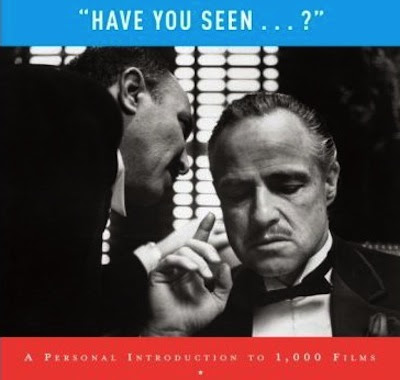 Have You Seen...?: A Personal Introduction To 1,000 Films, by David Thomson, is an alphabetical guide to "a thousand fiction films, going back to 1895 and ranging across the world - the landmarks are here, the problem films, a few guilty pleasures, a few forlorn sacred cows, some surprises, a thousand for you to see". The most surprising thing about the book is that I don't hate it.

Thomson's Biographical Dictionary Of Film is routinely described as the greatest film book ever written, but personally I can't stand it; and I often find Thomson's newspaper articles infuriating. Have You Seen...? is much more satisfying, though: the layout is clean and simple, with one page per film; the selection of titles is inclusive and diverse; and the reviews are fair, with Thomson acknowledging the merits of even the films he doesn't like. (Thomson previously contributed to Film: The Critics' Choice, a selection of 150 classic films.)

In Ploy, by Pen-ek Ratanaruang, a jet-lagged husband and wife arrive at a Thai hotel after their flight from America. At 5am, the husband (Wit) goes to the hotel bar for a smoke, and meets a teenage girl (Ploy). Wit invites Ploy up to the hotel room to rest, which naturally angers his wife (Daeng). Frustrated and jealous, Daeng goes out to a cafe, where she is chatted up by a stranger who invites her back to his apartment.

The romance has gone from Wit and Daeng's marriage - it's reached its expiration date, as Wit explains to Ploy. In contrast, in another room, the hotel's bartender has a passionate relationship with one of the maids. These scenes were deemed unacceptable by Thai censors, and the film was released here in a less explicit version, though the director's cut was screened at last year's Bangkok International Film Festival. The film was released on VCD in its cut version, though the Thai DVD is uncut and includes an audio commentary by Pen-ek.

Wit, Daeng, and Ploy all drift in and out of sleep, and we are never quite sure what is real and what is a dream. The film's slow pace, long silences, and ambient soundtrack all enhance the sleepy atmosphere. An early murder sequence is certainly a fantasy, though other scenes - the bartender's relationship with the maid, a potentially fatal encounter for Daeng, and a reconciliatory conclusion for the married couple - are more ambiguous, and could perhaps also have been dreamt by the three main characters. This may explain some confusing plot points: why did the receptionist tell Daeng that Wit and Ploy had left together when it was not true (like the proprietor of the McKittrick Hotel in Vertigo), and, more importantly, how did Daeng recover from her (ultimately melodramatic) ordeal so quickly?

The film reminded me of Kubrick's Eyes Wide Shut, in its themes (marital jealousy and sexual fantasy), its structure (confusion between dreams and reality; the slow pacing; the dangerous, illicit adventure and subsequent reconciliation), and even its score. Last year, Pen-Ek noted that Stanley Kubrick is one of his inspirations, and also that he is more interested in funerals than weddings. (In this film, Wit and Daeng are returning to Thailand to attend a funeral.) Pen-ek's recent films, including Ploy, share an emotional detachment evident in Eyes Wide Shut and in Kubrick's work generally.
Categories: film reviews, Thailand, video reviews 0 comment(s) 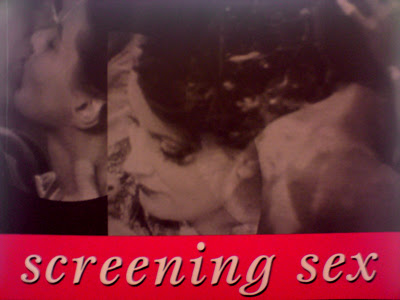 Screening Sex, by Linda Williams, is a history of the representation of sex in mainstream and arthouse cinema. It complements her definitive history of pornography, Hard Core.

My only qualm is: why devote so much space to Brokeback Mountain? Yes, it's topical, but surely it's a very minor footnote in the history of screen sex, and therefore doesn't merit the twenty pages and nine photographs that Williams accords it.

It's no surprise that Screening Sex is such a superlative study of its subject, given its author's reputation as the pre-eminent scholar of cinematic sex. The analytical text is accompanied by a comprehensive bibliography and some surprisingly graphic images.
Categories: book reviews, censorship 0 comment(s)

Norasinghavatar, currently showing at Traces Of Siamese Smile, is a short fantasy film by Wisit Sasanatieng. [It was produced last year as part of the Short Film Project in Commemoration of the Celebration on the Auspicious Occasion of His Majesty the King's 80th Birthday Anniversary; other directors partaking in the Project include Apichatpong Weerasethakul and Pen-ek Ratanaruang.]

The film is inspired by Hindu mythology, and features Norasinghawatarn, an incarnation of the god Narayana. The film's characters are all played by masked actors, filmed against bluescreen backgrounds generated by CGI. As in Wisit's films Tears Of The Black Tiger and Citizen Dog, there is extensive digital manipulation in post-production, brightening the colours to an almost psychedelic degree.
Categories: film reviews, Thailand 0 comment(s)
continued...