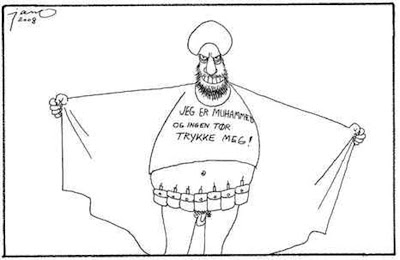 Adresseavisen, Denmark's oldest newspaper, caused considerable controversy after it published a cartoon of Mohammed last month. The cartoon, by Jan O Henriksen, shows a suicide bomber, with his genitals exposed, wearing a t-shirt proclaiming "I am Mohammed and no-one dares to publish me!".

After the image was published, on 3rd June, the editor and cartoonist attempted to deflect criticism by saying that it depicted merely an Islamic man claiming to act in the name of Mohammed. However, the caricature's t-shirt slogan is unambiguous, and the cartoon is one of the most gratuitously provocative Mohammed caricatures published in the mainstream media.

Another Danish newspaper, Jyllands-Posten, caused international protests after it printed twelve Mohammed cartoons in 2005. This prompted many other European newspapers to publish additional Mohammed caricatures, in solidarity with the Danish cartoonists and in defence of free speech.
Categories: censorship, media
continued...