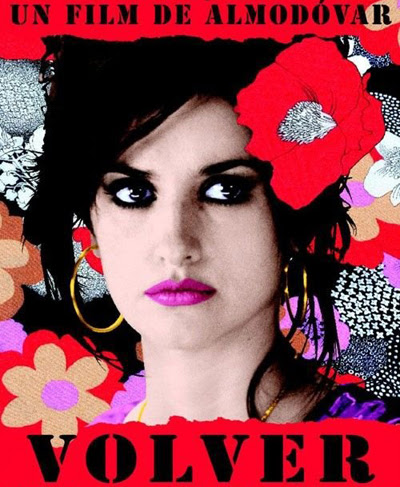 Pedro Almodovar's latest film, Volver, features Penelope Cruz as a strong, determined woman coping in defiance of her circumstances. The Spanish verb 'volver' translates as 'to return', and what returns here is a cycle of male abuse and female retaliation passed from one generation to the next.

I wonder if it was really necessary for the events to be so completely circular. We already accept Cruz's character as empowered and resilient without the slightly cliched final revelation. Chinatown presented a similar plot point in a much more dramatic manner.

If not as profound as the devastating Talk To Her, Volver is still a moving portrait of female bonding, with a genuine sense of community spirit replacing the sexual comedy of much of Almodovar's earlier work.
Categories: film reviews 0 comment(s) 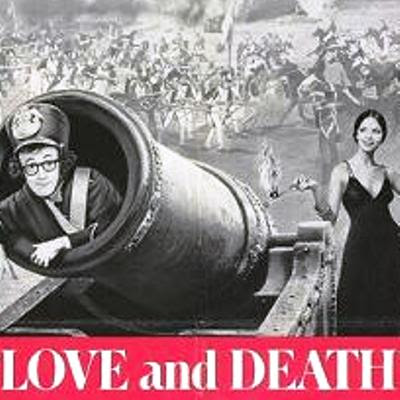 Love & Death is one of Woody Allen's "early, funny" films (the ones his fans prefer in the introspective fantasy Stardust Memories). Allen's films are often stereotyped as contemporary New York stories, though Love & Death couldn't be more different: it's set in Russia during the Napoleonic invasion.

Allen plays Boris, a pacifist forcibly dispatched to the front line. His trademark existential angst is present, in endless debates on theology and moral philosophy. Much of the comedy comes from Allen's anachronisms - he mishears "takes lovers" as 'takes uppers', for example. The film works as a parody of Russian literature and cinema, notably a quick montage of lethargic lion statues in an echo of Battleship Potemkin.

The Love of the title is represented by Diane Keaton, and her and Allen's scenes together are a joy to watch. I've always thought she was much warmer and more emotional than Allen's later partner/co-star Mia Farrow.

Death is personified by the Grim Reaper himself, in an extended reference to The Seventh Seal culminating in a 'dance of death' at the end of the film. In Bergman's film, the Reaper has a rather refined voice, though Allen's Reaper has a much deeper intonation, a characteristic later borrowed by Monty Python for the booming Reaper in The Meaning Of Life. In a further Bergman reference, Allen frames intersecting female faces in a recollection of Persona.
Categories: film reviews 0 comment(s) 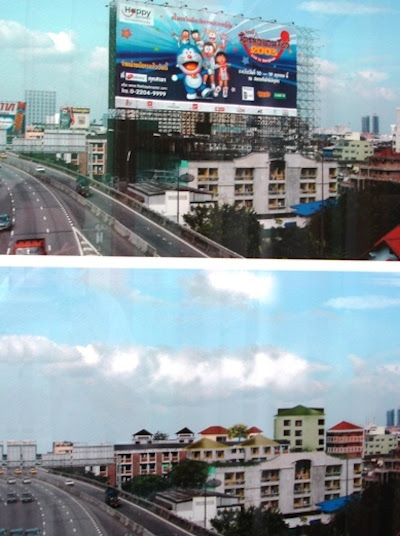 Kraisak was a senator in the Thaksin government, and these images represent his frustration at the red tape which prevented him from generating any real changes. They were a private, stress-relieving Photoshop experiment until Kathmandu suggesting exhibiting them publicly.

Bangkok, like any city, is full of advertising billboards. Kraisak has used Photoshop to digitally remove some of this clutter and present idyllic images of an advertising-free Bangkok cityscape. He juxtaposes 'before' (real) and 'after' (Photoshopped) photographs, and the contrast is startling.

If you look up close at the 'after' images, imperfections in the digital manipulation are revealed, though the immediate effect is highly impressive. (Like Pop Art, these works should be seen from a reasonable distance, generating a sudden impact.)
Categories: art exhibitions, Thailand 0 comment(s) 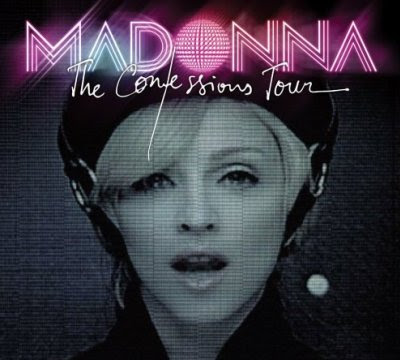 Madonna's Confessions Tour was released in a dual-format edition (CD and DVD) last month. Like I'm Going To Tell You A Secret, it features a CD with selected live tracks, though this time the DVD includes the complete concert (last year's Confessions Tour, filmed in London) with only minimal backstage rehearsal footage.

After the heavily re-edited Reinvention Tour extracts in the I'm Going To Tell You A Secret documentary, it's great to see the full Confessions Tour show on this new DVD. Madonna's voice sounds amazing (better than some of her previous tours), and, as in Reinvention, she is surrounded by dazzling video walls.

The show begins with the mediocre Future Lovers, though her performance is so good it makes you forget that the lyrics are nonsensical. Like A Virgin still sounds amazing after all these years (and was the only true classic missing from the Reinvention Tour).

The DVD set list is: Future Lovers, I Feel Love, Get Together, Like A Virgin, Jump, Confessions, Live To Tell, Forbidden Love, Isaac, Sorry, Like It Or Not, I Love New York, Ray Of Light, Let It Will Be, Drowned World/Substitute For Love, Paradise (Not For Me), Music Inferno, Erotica, La Isla Bonita, Lucky Star, and Hung Up. The concert was previously broadcast by NBC on 22nd November last year.

The CD track list is: Future Lovers, I Feel Love, Like A Virgin, Jump, Confessions, Isaac, Sorry, I Love New York, Let It Will Be, Music Inferno, Erotica, Lucky Star, and Hung Up.
Categories: Madonna 0 comment(s)

Curse Of The Golden Flower

Fifth Generation director Zhang Yimou's latest film, Curse Of The Golden Flower, is the most expensive production in the history of the Chinese film industry. The budget, reportedly $45,000,000 ($10,000,000 more than the previous Chinese record-breaker, The Promise - though less than half the cost of Titanic), was spent on recreating the opulence of 10th century China. Every surface of the imperial palace shimmers with iridescent decorations. The splendor of the film's production design is matched by the gravitas of its superb cast, led by Chow Yun-Fat and Gong Li, two superstars of Asian cinema.

Emperor Ping is slowly poisoning his consort Phoenix, the Empress, whom he married not for love but for power (as she is the previous Emperor's daughter). The Empress seeks solace in the arms of her stepson Wan, the Crown Prince, and plots to avenge her husband's cruelty. She confides in Wan's brother, Prince Jai, who promises to lead an army of 10,000 soldiers in a coup against the Emperor.

Exactly why the Emperor is poisoning his consort's medication is never made clear; we can infer that it is a punishment for her (almost) incestuous infidelity. Though the Empress is aware of the poisoning, she is unable to stop it, as her medication is administered with clockwork regularity and scrutinised meticulously. We may marvel at the formal precision of decadent, ritualised palace life, though the stifling constraints of protocol are also self-evident.

The plotting and counter-plotting within the palace walls are Shakespearean in their machinations and repercussions, while the ensuing battle (between troops loyal to the Empress, led by Prince Yai, versus those of the Emperor) is operatic in its scale. In these senses, the film is close to Ran, Akira Kurosawa's samurai interpretation of King Lear.

The Emperor is portrayed as a power-crazed, cruel, and heartless man, though his consort's character is rather more complex. Restrained and symbolically imprisoned by her imperial position, she is a sympathetic character. However, her affair with her stepson and her relish at a devastating revelation she orchestrates suggest that she is not completely innocent herself. Their youngest son, Prince Yu, demonstrates a selfish ambition beneath his placid exterior, and eldest son Prince Wan's actions are ruled by his loins rather than his head. In contrast, the principled middle son, Prince Yai, is the film's hero.

The outcomes of the Emperor's and Empress's actions culminate in bloodshed on both an epic and intimate scale. Yet, despite a series of personal tragedies, the dynasty does not unravel, and imperial power is unassailable - as, for instance, when the blood from the battle is (literally and metaphorically) swept under the carpet.

Despite a sword-fighting scene and the aforementioned battle sequence, this is not a martial-arts film in the same vein as Zhang Yimou's earlier mega-budget ('dapian') productions Hero or House Of Flying Daggers. It marks a reunion between the director and his muse, Gong Li: she starred in several of his early films, and they had a long-lasting affair, though they separated personally and professionally in 1995.
Categories: film reviews 0 comment(s)
continued...