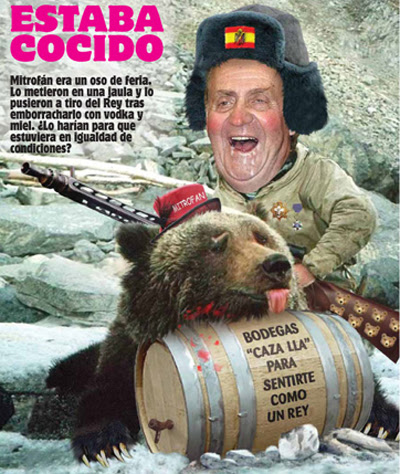 Two days ago, the satirical Spanish magazine Deia published a collage of Spain's King Juan Carlos, showing him drooling victoriously after shooting a bear which had been subdued with a barrel of vodka. The image is a reference to an alleged hunting incident in which the King apparently killed a drunken bear. Legal proceedings have been instigated against the magazine, and it may face charges of lèse-majesté.
Categories: censorship, lese-majeste, media 0 comment(s)

Blasphemy, by S Brent Plate, is the first-ever full-length study of blasphemous art. It begins with a lengthy, though generalised, account of the Mohammed cartoons controversy, and is profusely illustrated (including small reproductions of a few of the Mohammed caricatures, though none of the subsequent cartoons inspired by them).

Most of the illustrations, though, are not really blasphemous. Several, such as works by Jake and Dinos Chapman, Marcus Harvey, and others, have no relation to blasphemy at all. A chapter on flag desecration seems extraneous (and the subject, along with modern American examples of artistic blasphemy, was discussed in Steven C Dubin's excellent book Arresting Images).

Potentially blasphemous art representing Jesus as sexually active (such as The Last Temptation Of Christ) or tumescent (such as Terence Koh) are glossed over or excluded. The author explains that he has concentrated solely on visual art, though I'm still surprised that he didn't find room to even briefly mention the novel The Satanic Verses or the poem The Love That Dares To Speak Its Name, which are perhaps the most famous examples of blasphemous art in the UK.
Categories: blasphemy, book reviews, censorship 0 comment(s) 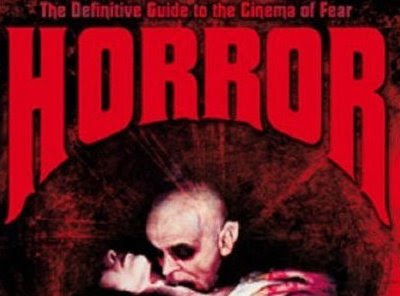 Horror: The Definitive Guide To The Cinema Of Fear is a new book about horror cinema. Not just any book, mind you, but the Definitive Guide (or so it proclaims). Any book with the word definitive in its title is asking for trouble, because the author's idea of definitive may not be the same as the reader's.

In this case, the authors are James Marriott and Kim Newman. Or rather, Marriott is editor and principal contributor, Newman wrote introductory essays to each chapter, and six others wrote reviews and shorter essays. It's rather misleading that Marriott and Newman are the only names on the cover, especially because they are not credited as editors - the cover implies that they are co-authors, which is not strictly true.

Newman is one of the very best writers on horror cinema, and his essays in this new book (overviews of the genre in each decade) are excellent. (He also wrote Nightmare Movies, a comprehensive study of the modern horror film.) It's a shame, therefore, that he didn't write any of the chronological film reviews that make up the bulk of the book.

The Top 100 Movies Of All Time 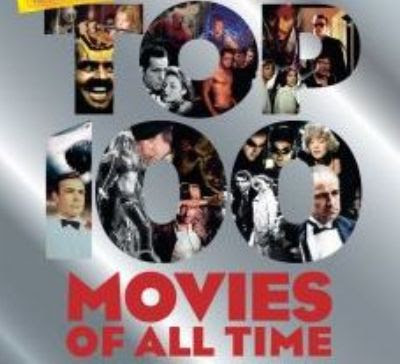 Readers of Total Film magazine have voted for The Top 100 Movies Of All Time, as follows:

There are more sequels and remakes in this new list, and fewer world cinema titles. It's depressing that King Kong is the Peter Jackson remake, not the original. Similarly, Scarface is the remake instead of the original. Some Like It Hot is the 1959 comic masterpiece, not the obscure 1939 comedy.
Categories: film lists, media 0 comment(s)

There is some extremely realistic animation, especially the Route 66 background landscapes and the gleaming car chassis. The plot is entertaining enough, though it's nothing more than the traditional Disney morality tale of a self-centered character (in this case, a racing car named Lightning McQueen) who must learn the value of friendship and community.
Categories: film reviews 0 comment(s)

Shaun Of The Dead

Shaun Of The Dead has defined a new film sub-genre: rom-zom-com (romantic zombie comedy). It's directed by Edgar Wright, who previously worked on UK TV sitcoms such as Spaced. The lead actor (and co-writer) is Simon Pegg, who was also a Spaced cast-member.

Pegg plays Shaun, whose dull life is interrupted by a plague of slow-moving zombies (a la Dawn Of The Dead). However, because he's so used to seeing drunks and beggars on the streets, he doesn't realise that they are actually zombies. Several scenes show people going about their daily lives in a state of somnambulistic catatonia - are the undead zombies really any different from these mindless commuters?
Categories: film reviews 0 comment(s) 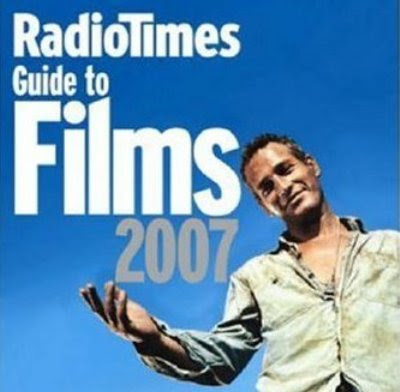 The 2007 edition of the annual Radio Times Guide To Films includes a list of 100 Landmark Films, as follows (in chronological order):Note that The Maltese Falcon is the John Huston version, which is actually a remake of an earlier (and inferior) Roy Del Ruth film; Frankenstein is the superior James Whale version, not the Thomas Edison silent version.
Categories: book reviews, film lists, media 0 comment(s)
continued...