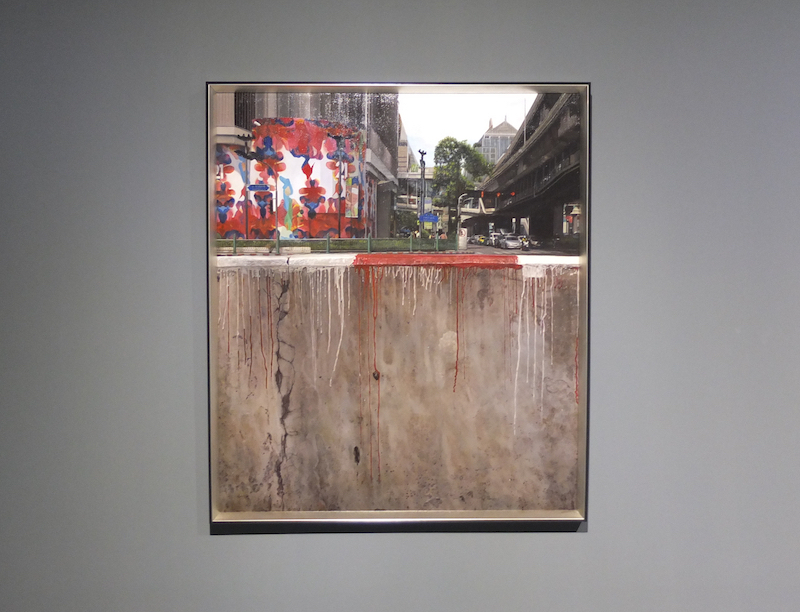 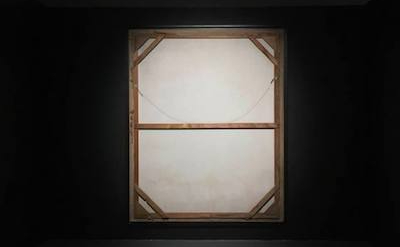 Prior to 2014, Wittawat Tongkeaw was known primarily for his landscape paintings, though since the coup his art has become increasingly political. The works in his new exhibition The L/Royal Monument (นิ/ราษฎร์) at Subhashok Arts Center in Bangkok, displayed in four themed sections, provide a commentary on modern Thai politics expressed through coded metaphors and symbolism.

The exhibition’s first room, Interlude, draws on Wittawat’s background as a landscape painter, though these landscapes have political subtexts. Two of the paintings refer to the 2010 massacre of red-shirt protesters: Intersection of Wills (ราษฎร์​ประสงค์) shows Ratchaprasong, the focal point of the protest, and Interregnum (สิ้นสุดพุทธาวาส) depicts a relief sculpture from Wat Pathum Wanaram, a temple sheltering six protesters who were killed by military snipers. Like Pachara Piyasongsoot’s Anatomy of Silence (กายวิภาคของความเงียบ), these paintings represent politically-loaded locations; to use Dutch painter Armando’s term, they are ‘guilty landscapes’. The theme of this first room is transition, symbolised by expansive sunsets and tiny details (a traffic light about to turn green). The political significance of this transition is suggested by the exhibition’s other rooms.

The second room, Imagining Law-abiding Citizens, features paintings of four pro-democracy campaigners, all of whom have been charged with lèse-majesté. They include Captain Justice (ทนายอานนท์), a portrait of Arnon Nampa, who led protests last year calling for reform of the monarchy; and The Unforgiven Blues (หมอลำแบงค์), a portrait of Patiwat Saraiyaem, an actor who was jailed for his performance in the play เจ้าสาวหมาป่า (‘the wolf bride’) and later appeared in Ten Years Thailand. Each portrait has a blue background, in an allusion to that colour’s idiomatic and symbolic meanings: blue indicates the artist’s sadness at the persecution of the four subjects, though it also traditionally represents the monarchy, as in Wittawat’s previous exhibition, 841.594.

The other two rooms, Memorabilia and The Artist’s Trial, feature installations and projections. In the latter room is Jojo and the Bookstalk (โจโจ้ผู้ฆ่ายักษ์), a precarious pile of books and journals, the texts that led to Wittawat’s political awakening, known in Thai as ta sawang. Two other installations in the same room are especially provocative Creation-Conclusion (เริ่ม-จบ) is a painting of the sky on an upturned easel, and The Masterpiece (มาสเตอร์พีซ) is a weather-beaten painting hung back-to-front. The Thai word for ‘sky’ (fah) is a metaphor for the monarchy, and the upturned easel resembles a contraption more commonly associated with the French Revolution. The subject of the back-to-front portrait can be guessed from its propagandistic original title, พระเกียรติคุณ กว้างใหญ่ไพศาล (‘his honour spread far and wide’), which is still faintly visible on the reverse.

The L/Royal Monument opened at SAC Gallery in Bangkok on 22nd June, and runs until 18th September. Its opening coincides with the anniversary of Thailand’s 1932 transition to constitutional monarchy and, as Wittawat writes in the exhibition brochure, the “physical components—names, plaques, monuments” commemorating this have been systematically removed from public spaces.
Categories: art exhibitions, lese-majeste, red-shirts, Thailand
continued...