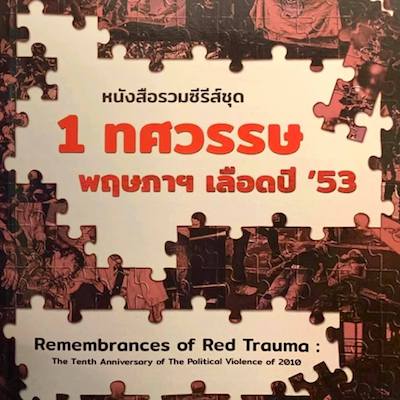 Charuphat Petcharavej’s short story Hakom (ห่าก้อม) was first published in an anthology of Isaan literature, มวลดอกไม้ในยุคมืด (‘flowers in a dark age’). It was translated into English last year, and reprinted in Remembrances of Red Trauma: The Tenth Anniversary of the Political Violence of 2010 (1 ทศวรรษ พฤษภาฯ เลือดปี ’53), a collection of articles reflecting on the 2010 massacre and “Thai society’s deep-rooted culture of impunity.” (Pisitakun Kuantalaeng’s Ten Year project also commemorated the tenth anniversary of the massacre.)

Hakom is a supernatural tale of a phi pob spirit possessing an Isaan villager, though the story is also a political metaphor. The fictional village of Dong Bong is a microcosm of Thailand, and its former headman, Wan, is a proxy for Thaksin Shinawatra. Charuphat writes that Wan became persona non grata: “A group of villagers had driven him out of the village, forcing him to make a new home for himself on a hill, far away from the village.” This mirrors Thaksin’s self-exile following the 2006 coup against his government.

Wan’s sister, Buaphan, thus represents Thaksin’s sister, Yingluck, and the story describes her futile efforts to protect the village from its attackers: “Against these poisonous animals and fierce beasts out on the streets in a show of full force, the villagers [had] little at their disposal to fight back. So many of them went to see Nang Buaphan for help. But she had nothing to match the power of the attackers. She could only tell the villagers to endure this crisis until one day, the monsters would run out of energy and leave.”

This vivid description of a village under siege echoes the military massacre of red-shirt protesters in 2010, and the 2014 coup against Yingluck’s administration. Ukrit Sa-nguanhai’s short film The Pob’s House (บ้านผีปอบ) also employs a phi pob as a metaphor for political violence. In Ukrit’s film, an elderly woman is beaten by her fellow villagers, who believe her to be possessed by a phi pob. Like Hakom, The Pob’s House was also a response to the 2010 massacre.
Categories: book reviews, politics, red-shirts, Thailand, Thaksin Shinawatra, Yingluck Shinawatra
continued...