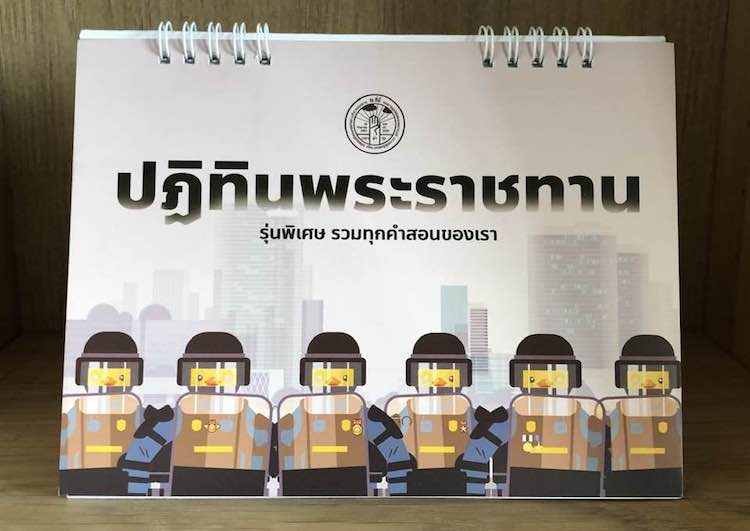 Yesterday, a member of the pro-democracy group Khana Ratsadon was arrested at home and charged with lèse-majesté. Police also confiscated 174 desk calendars, which had been sold online by the group since Boxing Day.

The lèse-majesté charge stems from the calendar’s title and two of its illustrations. According to the police, the title—ปฏิทินพระราชทาน (‘royal calendar’)—implies that the calendar is an official publication rather than a parody. One drawing features the words “กล้ามาก เก่งมาก ขอบใจ” (‘very brave, very good, thank you’), spoken by King Rama X during a walkabout on 23rd October last year. The other controversial picture shows a yellow duck with a bead of sweat on its beak: a reference to King Rama IX, who was photographed with a bead of sweat on his nose, symbolising his hard work.

This is the fourth calendar to be investigated by the Thai authorities in recent years. Wall calendars featuring greetings from Thaksin and Yingluck Shinawawtra were seized in 2018 and 2016. In 2010, a wall calendar by the beer company Leo, featuring models in body paint, was accused of promoting alcohol in contravention of the Alcoholic Beverage Control Act.
Categories: censorship, lese-majeste, politics, Thailand
continued...