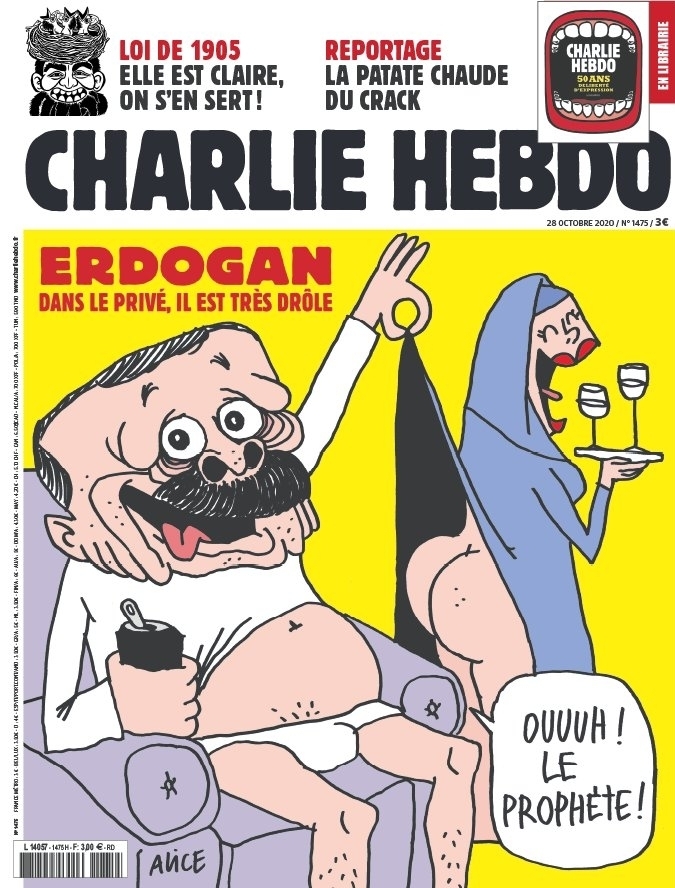 Turkish President Recep Tayyip Erdoğan has filed criminal defamation charges against the satirical French magazine Charlie Hebdo, and the magazine is also under investigation by Turkish authorities for insulting the President, which is a crime in Turkey though not in France. This week’s issue of Charlie Hebdo, published yesterday, features a lecherous Erdoğan caricature on its cover, shown lifting a Muslim woman’s dress.

Legal action against the magazine is highly unlikely, though the controversy will further increase diplomatic tensions between Turkey and France. Last week, Erdoğan criticised French President Emmanuel Macron, after Macron defended a French school teacher who showed his pupils the Mohammed cartoons recently reprinted by Charlie Hebdo. (The teacher was beheaded in Conflans-Sainte-Honorine, near Paris, in a shocking act of terrorism.)

Erdoğan has previously filed charges against the Turkish magazines Cumhuriyet (in 2004 and 2014), Penguen (in 2014), and Nokta (in 2015). He also sued the artist Michael Dickinson over the collages Good Boy and Best in Show. In 2016, Erdoğan sued a German comedian who recited a poem mocking him. (In solidarity with the comedian, his poem was read out in the German parliament, and The Spectator launched an anti-Erdoğan poetry competition that was won by Boris Johnson.)
Categories: censorship, media, politics
continued...