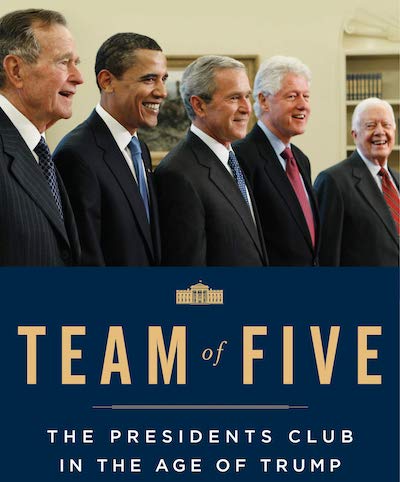 Team of Five: The Presidents Club in the Age of Trump, published yesterday, reveals how the most recent ex-Presidents and their spouses have adapted to life out of office. Author Kate Anderson Brower interviewed Jimmy Carter and three former First Ladies, though most of the ‘team of five’ didn’t participate.

Brower also spoke to the incumbent, Donald Trump, and the book begins with her Oval Office interview. Trump showed Brower a letter he had received from Kim Jong Un, presumably the same one that he showed to another interviewer, Doug Wead. In both cases, Trump used the document to give the illusion of bringing the interviewers into his confidence: he told Wead that his advisors “don’t want me to give these to you”, and he told Brower that she “was not meant to see this,” though he had already Tweeted the letter months earlier.
Categories: book reviews, Donald Trump, politics
continued...