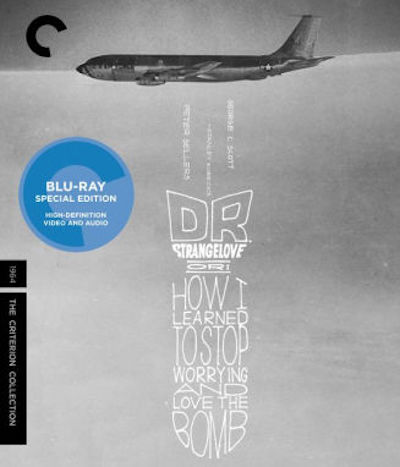 Stanley Kubrick’s Dr Strangelove was first released by the Criterion Collection on laserdisc, in 1992. That transfer was supervised by Kubrick himself, and he even designed the front cover, though the disc was swiftly withdrawn from sale after Kubrick complained about the unauthorised inclusion of a screenplay draft among the supplementary features. (The draft script opened with a segment titled The Dead Worlds of Antiquity, told from the perspective of an alien civilisation.)

The Criterion laserdisc presented Dr Strangelove “in its original split-format aspect ratio for the first time.” The film alternated between 1.66:1 and 1.33:1, as it had on its original theatrical release. (Criterion’s Lolita laserdisc also featured these alternating ratios.) When Dr Strangelove was released on DVD for the first time, in 1999, the split-format was retained, though all subsequent releases have been matted to 1.66:1. Sadly, the Criterion blu-ray, released in 2016, is also framed at 1.66:1, though it does have an uncompressed mono soundtrack.

The blu-ray’s supplementary features include an extraordinary new discovery: an exhibitor’s trailer of highlights from the film, narrated by Kubrick himself (“Please remember, as you watch this, that the material is uncut”). The disc also includes an interview with Mick Broderick, author of the excellent Reconstructing Strangelove. The packaging is equally impressive, with reproductions of the “miniature combination Russian phrasebook and Bible” and the “Plan R” dossier.
Categories: Stanley Kubrick, video reviews
continued...