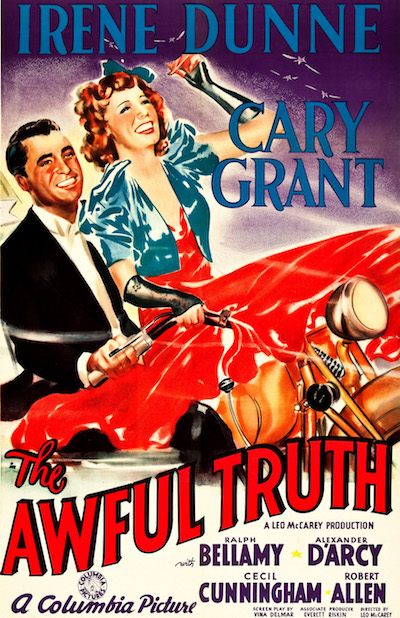 In 1933, Cary Grant appeared in supporting roles alongside Mae West in She Done Him Wrong and I’m No Angel, but it was The Awful Truth, released four years later, that made him a star. Grant and Irene Dunne (who received top billing) play a mutually distrustful—and mutually unfaithful—married couple who decide to divorce, yet are unable to stop themselves from sabotaging each other’s new romances.

The Awful Truth established the suave persona that would become synonymous with Grant for the remainder of his career. It’s one of the greatest screwball comedies, a subgenre that emphasised farcical action, fast-paced delivery, witty repartee, and battle-of-the-sexes humour.

Leo McCarey’s direction is a notch below that of Howard Hawks, who made the screwball classics Bringing Up Baby and His Girl Friday (both also starring Grant), though The Awful Truth is a more satisfying film. In Bringing Up Baby, Grant’s character is absent-minded and ineffectual, and the havoc wreaked on him is rather exasperating. His Girl Friday’s frenetic pace is impressive though exhausting. In contrast, The Awful Truth feels more sophisticated, and its satirical swipes at the institution of marriage are as sharp as ever.

The film ends with a touching scene clearly modelled on the Walls of Jericho sequence from the popular romantic comedy It Happened One Night (which is sometimes—incorrectly, I would argue—described as the first screwball comedy). In turn, The Awful Truth’s essential premise—Cary Grant jeopardising his (ex) wife’s engagement to a rube played by Ralph Bellamy—was repeated in His Girl Friday.
Categories: film reviews
continued...