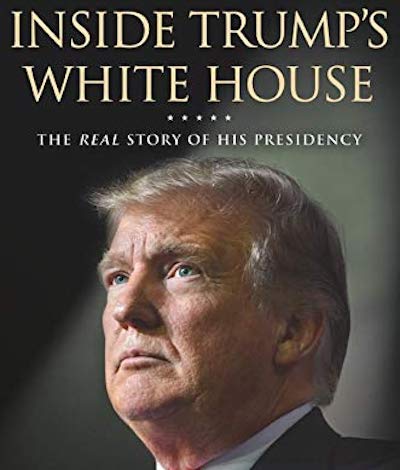 Michael Wolff’s Fire and Fury: Inside the Trump White House began life as an authorised record of Donald Trump’s presidency. After initially giving the book his tacit approval, Trump later tried to sue the publisher for libel. Now, almost two years later, comes another author with his own offically sanctioned account. “I was being given the nod to write an official history of a presidency,” boasts Doug Wead, writer of Inside Trump’s White House. (The US subtitle is The Real Story of His Presidency, while in the UK it’s The Authorized Story.)

The book is a response to Fire and Fury and Bob Woodward’s equally critical Fear, both of which depended on well-placed though unidentified sources. Wead disparages this “secondhand testimony, which was usually anonymous” though he later admits that he also relied on “a long list of anonymous sources inside the Trump White House and the government”.

His sources were apparently selected for him by Trump’s team: “White House staffers sent me names and phone numbers of people to contact.” These contacts include Dan Scavino and Keith Schiller—recognisable to anyone familiar with Trump’s background—who Wead admits are “names that I had never heard before”. In another example of Wead’s naivety, he boasts that Trump showed him a top-secret letter from Kim Jong-un—“My people don’t want me to give these to you”—though Trump had tweeted the entire text months earlier.

Two previous (and similarly hagiographic) books have claimed unique access to Trump. Corey R. Lewandowski and David N. Bossie wrote that Trump’s Enemies contained "the only formal book interview President Trump has sat for since being elected to office," and Ronald Kessler maintained that The Trump White House featured “the only interview for a book Trump said he has given or will give as president”. Presumably, Trump co-operated with Inside Trump’s White House because of Wead’s equally dependable loyalty: Trump tells him, “Doug, I think you and I have good chemistry. That’s going to be a good thing for this book.”

The result is a flattering portrait of the Trump administration, not quite as fawning as Trump’s Enemies though devoid of any brickbats. Whereas The Trump White House was surprisingly critical of Ivanka Trump and Jared Kushner, Wead lavishes praise on both of them, and refers to Kushner as ”the president’s brilliant son-in-law”. In fact, Wead devotes a chapter to each of Trump’s adult children, making this essentially a Trump vanity project.
Categories: book reviews, Donald Trump, politics
continued...