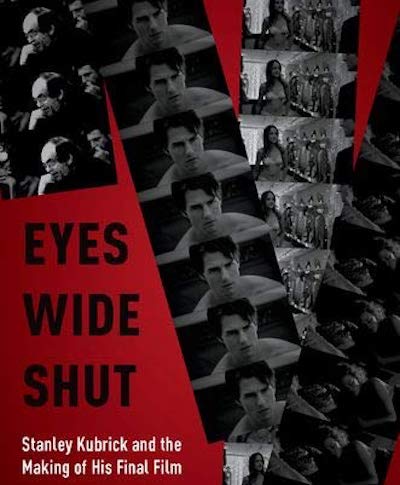 Eyes Wide Shut: Stanley Kubrick and the Making of His Final Film examines the production and legacy of Eyes Wide Shut, twenty years after its theatrical release. Authors Robert P. Kolker and Nathan Abrams make effective use of files from the Stanley Kubrick Archive, comparing script drafts and using production reports to create a detailed account of the extended filming process. (Frederic Raphael’s self-serving memoir Eyes Wide Open is also a major source.) Endnotes are included, though they are not numbered in the body text, thus phrases such as “Cruise says” misleadingly imply that Tom Cruise (for example) spoke to the authors personally.

The book’s second half, dealing with Eyes Wide Shut’s post-production and release, is less impressive than the first. There are only two paragraphs devoted to the editing process, and Kubrick’s editing notes are dismissed as “gobbledygook.” The film was censored to comply with MPAA regulations, though the authors were unable to confirm how this was decided: “whether Kubrick intended to do this remains the subject of some controversy.” (The soundtrack was also changed, for the film’s European theatrical release and all video versions, though the book makes no mention of this.)

Kubrick died during post-production, and the book leaves key questions relating to posthumous editorial decisions unresolved. Most remarkably, the film’s state of incompletion at the time of Kubrick’s death is dealt with under the subheading “The Irrelevant Question”. Such matters are dismissed as mere trivialities: “Whether it might have been different in some small way is ultimately irrelevant and certainly counterproductive to our understanding of the film and the pleasure we take from it.” This is a pretty extraordinary statement, given Kubrick’s meticulous attention to detail.
Categories: book reviews, Stanley Kubrick
continued...