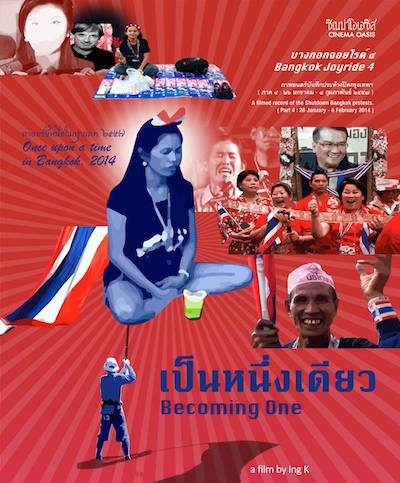 Bangkok Joyride covered the early stages of the PDRC's campaign in parts one and two, How We Became Superheroes (เมื่อเราเป็นยอดมนุษย์) and Shutdown Bangkok (ชัตดาวน์ประเทศไทย). Part three, Singing at Funerals (เพลงแห่ศพ), covered the buildup to the 2014 election. Part four covers the protests from 26th January to 8th February 2014, including the 2nd February election.

The PDRC sabotaged the election, blockading polling stations to prevent voting. (It was ultimately invalidated, and the military launched a coup before another poll could take place.) Despite this, Bangkok Joyride celebrates the protesters, and in parts three and four Ing herself appears on stage at PDRC rallies. She can also be heard from behind the camera, wishing the protesters luck; in part four, she tells a demonstrator: "We fight the exact same battle."

In part three, Ing accused the mainstream Western media of pro-Thaksin bias, and this conspiracy theory is expanded in part four when she harangues the BBC's Bangkok correspondent, Jonathan Head: "How do you sleep at night, Mr Head?" Bangkok Joyride's fetishisation of national symbols also continues in part four: protesters are filmed while standing for the national anthem, not once but five times.