"contemptuous by reason of
it scandalising the Court..." 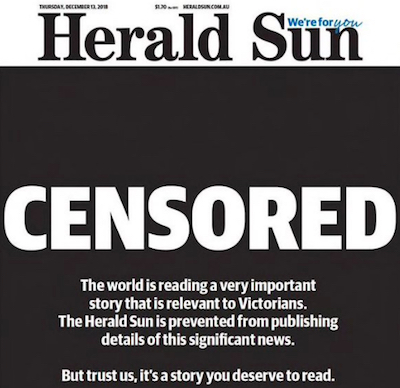 The Director of Public Prosecutions (DPP) in the state of Victoria, Australia, has written to dozens of journalists, accusing them of contempt of court in relation to the trial of George Pell, a former Catholic archbishop accused of child abuse. Pell was convicted of five counts on 11th December last year, though the guilty verdict could not be reported by Australian media due to a gagging order imposed to prevent coverage potentially prejudicing a subsequent trial.

The reporting restrictions effectively amounted to a superinjunction, as even the existence of the gagging order could not be reported. On the day after Pell's conviction, the Sun Herald newspaper ran the banner headline "CENSORED" on its front page, describing the case in general terms as "a very important story that is relevant to Victorians." Similarly, other news outlets referred to the conviction of a high-profile figure on unspecified charges.

The restrictions were lifted yesterday, after Pell's second trial was dismissed, though DPP Kerri Judd warned journalists that they faced "substantial imprisonment" for contempt. In letters to individual reporters, she claimed that indirect coverage of the case had "a definite and real tendency to interfere with the administration of justice and therefore constitutes sub judice contempt, is contemptuous by reason of it scandalising the Court, and aided and abetted contempts by overseas media".
Categories: censorship, media
continued...