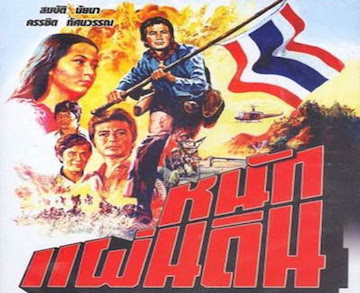 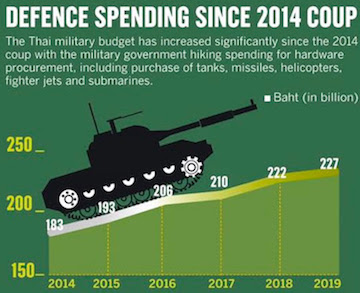 Yesterday, army chief General Apirat Kongsompong invoked arguably the darkest period in Thailand's history when he recommended a song associated with violence and intolerance. At a press conference, Apirat was asked to comment on the Pheu Thai party's manifesto pledge to reduce military spending after the 24th March election. In response, he said that they should listen to หนักแผ่นดิน ('burden of the land'). He then issued an order for military radio stations to play the song, though the directive was rescinded shortly afterwards.

หนักแผ่นดิน, composed by Boonsong Hakritsuk in 1975, denounces anyone not affirming their loyalty to the nation, religion, and monarchy as traitorous 'scum of the earth'. The ultranationalist song fomented anti-Communist violence when it was repeatedly broadcast in the days before 6th October 1976. It was the anthem of the Village Scouts, a paramilitary group that stormed Thammasat University on 6th October. Forty-six students were killed by paramilitary and state forces, and their corpses were desecrated by a baying mob.

The song was also the theme tune to a film of the same name, directed by Sombat Methanee in 1977. The Village Scouts are the heroes in this anti-Communist propaganda movie. (Rachel V. Harrison discusses this and similar films in a chapter of Cultures at War.) Apirat's invocation of หนักแผ่นดิน despite (or because of) its incendiary legacy sends a disturbing signal that the army has barely changed in the past forty years. (Apirat's father, General Sunthorn, led the coup that resulted in the 1992 'Black May' massacre. The apple didn't fall far from the tree.)

Thunska Pansittivorakul's documentary Homogeneous, Empty Time (สุญกาล) examines the nationalist fervour stoked by state propaganda such as หนักแผ่นดิน. In one sequence, filmed at a recent Village Scout ceremony, the Scouts all pledge to defend the monarchy. Cut to: historical footage of Village Scouts attacking the students on 6th October. In Planetarium, Chulayarnnon Siriphol's segment of Ten Years Thailand, a fictional leader and her minions all wear Scout uniforms, in an echo of the Village Scouts: in Chulayarnnon's dystopian vision, the entire country has been taken over by this royalist militia.

Apirat's resurrection of such a divisive song has overshadowed the issue of military spending that Pheu Thai highlighted. As The Nation reveals today, the military's budget has increased by almost a quarter since the 2014 coup. Much of this money has been spent on sophisticated equipment that is entirely redundant, as the Thai army's primary specialisms seem to be massacring Thai civilians and launching coups. (Paul Chambers and Napisa Waitoolkiat discuss military expenditure and corruption in Khaki Capital.)
Categories: 6th October, politics, Thailand, Thunska Pansittivorakul
continued...