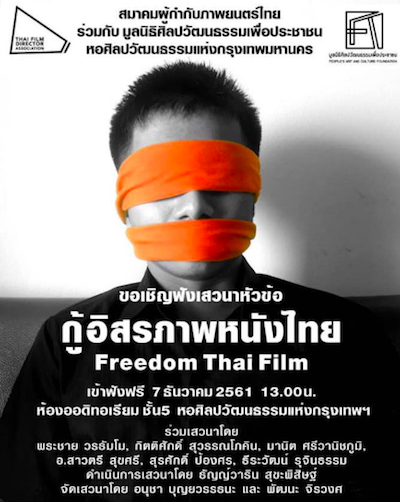 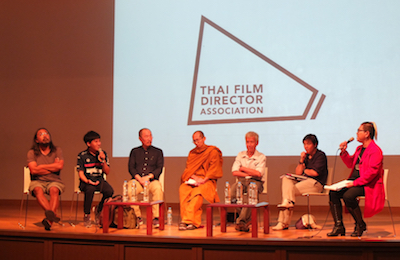 A panel discussion about Thai film censorship took place this afternoon at BACC in Bangkok. Freedom Thai Film (กู้อิสรภาพหนังไทย), organised by the Thai Film Director Association, was introduced by Tanwarin Sukkhapisit, whose Insects in the Backyard (อินเซค อินเดอะ แบ็คยาร์ด) was released last year.

The event was prompted by the censorship of Surasak Pongson's Thibaan: The Series 2.2 (ไทบ้านเดอะซีรีส์ 2.2) last month: three cuts were required before it was passed for release. (I interviewed Surasak before the discussion started, and he explained that he worked around the clock for two days to release the film on time despite the censorship.)

Manit Sriwanichpoom, producer of the still-banned Shakespeare Must Die (เชคสเปียร์ต้องตาย), also took part, as did Theerawat Rujinatham, director of Rap Against Dictatorship's anthemic music video Which Is My Country (ประเทศกูมี) and Chulayarnnon Siriphol, whose short film Birth of Golden Snail (กำเนิดหอยทากทอง) was banned from the Thailand Biennale last month. The event was similar to Freedom on Film (สิทธิหนังไทย), a seminar held at BACC in 2013.
Categories: censorship, film screenings, Thailand
continued...