"The Washington Times
retracts it in its entirety..." 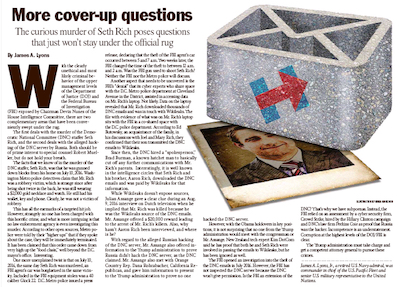 The Washington Times has reached an out-of-court settlement with Aaron Rich, after he sued the newspaper for defamation. Rich's brother, Seth, became the subject of a conspiracy theory after his unsolved murder in 2016. It was alleged, without any evidence, that Seth Rich had leaked Democratic National Committee emails to WikiLeaks.

In a Washington Times op-ed published on 2nd March (page B3), James Lyons stated the conspiracy theory as a fact, implicating both Seth and Aaron Rich in the DNC email leak: "Interestingly, it is well known in the intelligence circles that Seth Rich and his brother, Aaron Rich, downloaded the DNC emails and was paid by Wikileaks for that information." [Aside from its defamatory nature, the sentence has at least three grammatical errors.]

The newspaper has since deleted the article (headlined "More cover-up questions") from its website. It has also issued a retraction, disavowing the op-ed's allegations about the Rich brothers: "The Washington Times now does not have any basis to believe any part of that statement to be true, and The Washington Times retracts it in its entirety."