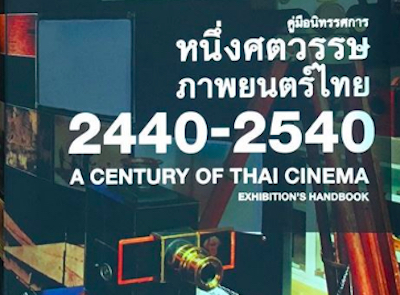 A Century of Thai Cinema Exhibition's Handbook [sic] (คู่มือนิทรรศการหนึ่งศตวรรษภาพยนตร์ ไทย 2440-2540) was published by the Thai Film Archive in 2013. It provides a concise history of Thai cinema, and includes photographs of souvenir programmes and other film memorabilia. The book also serves as a catalogue for the Archive's permanent exhibition on Thai filmmaking, for which guided tours are available. ("Visitors aren't allowed to wander around by themselves," the foreword explains, rather ominously.)

Author Dome Sukwong, who founded the Archive, is the foremost authority on Thai film history. His other English-language book is the folio-sized A Century of Thai Cinema. The only other books on Thai film history in English are Thai Cinema (Le cinéma thaïlandais; edited by Bastian Meiresonne) and the forthcoming Thai Cinema: The Complete Guide (edited by Mary J. Ainslie and Katarzyna Ancuta).
Categories: art exhibitions, book reviews, Thailand
continued...