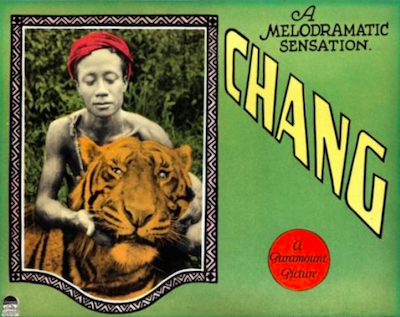 Chang: A Drama of the Wilderness, the silent film made "in the Jungles of Northern Siam" by the directors of King Kong (Merian C. Cooper and Ernest B. Schoedsack), was an early feature-length documentary released in 1927. Like Robert Flaherty's Nanook of the North, and other documentaries of the period, it combines real locations with staged events. (It also shows the autobiographical nature of the Carl Denham character in King Kong who, like Cooper, made melodramatic documentaries in exotic locations.)

Chang was last shown here as part of Bangkok Bananas in 2009, with music performed by a live orchestra. It will be shown again on 25th February at the Thai Film Archive in Salaya, also with a live orchestral soundtrack, and the screening is free.